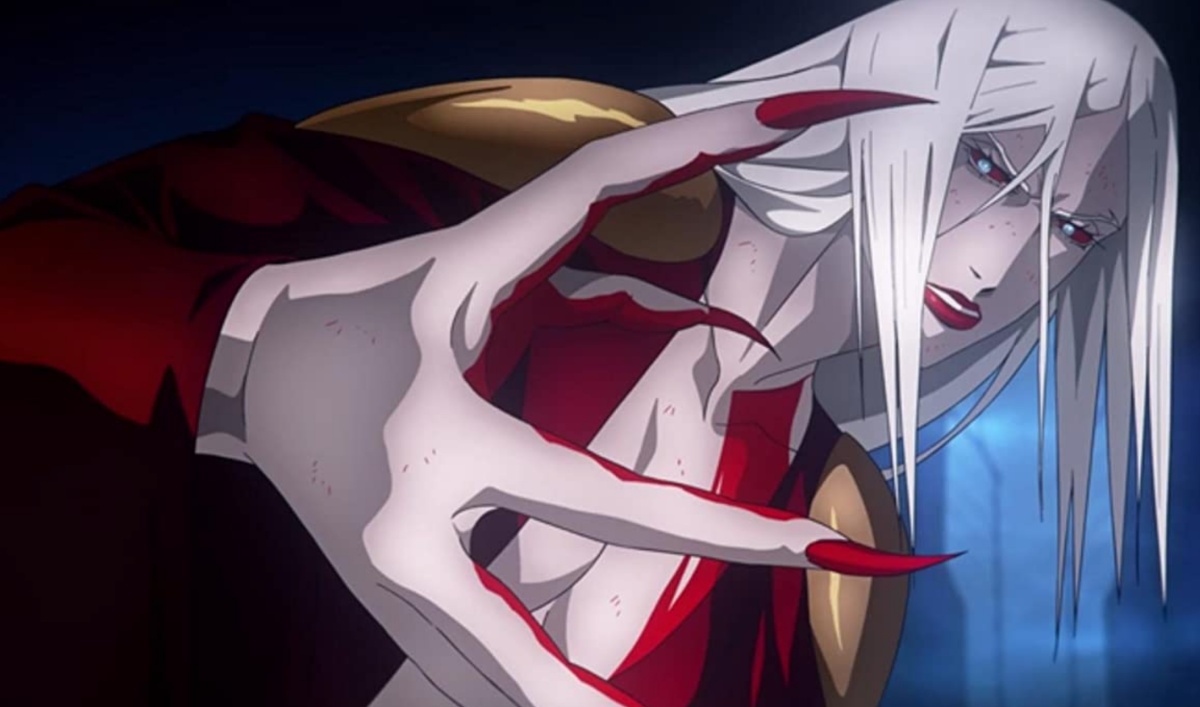 Despite its bad audio mixing at times, the final season of Netflix’s Castlevania animated series really pleased me in how it crafted emotional endings for all its major characters. All of them are worth exploring, but today I’m going to talk about Carmilla, one of the Queens of Styria.

**Spoilers for the series finale of Castlevania.**

When Carmilla entered the series in season two, I was concerned they were going to make her a one-note girl boss, but thankfully, in season three, when we saw her surrounded by her sisters, it added layers to who she is. Those layers were continued upon in season four.

From what we know, Carmilla was turned into a vampire centuries ago by an unknown vampire, whom she later killed, claiming that he was “old and cruel” to those around him. That led her to have a vendetta against many of the old, male, and cruel vampires who controlled the world around her. That vengefulness turned into an ambition that led her to be the badass vampire woman she becomes.

Lenore sees her plotting for world domination, an ambition that seems fit for disaster because humans will always fight for their place in the world, and asks Carmilla if having it all will make her happy.

“The first part of my life was men taking things from me,” Carmilla says. “And then I took their lives, and their things, and their homes.” She recounts how she tried to live with her enclave of women vampires in Styria, but more came after them. When they asked for help, “bloody women” was the response. And so Carmilla has chosen to take her survival instinct and ambition and turn it into a drive for power.

It is a familiar story.

When I think about female vampires who turn “evil” in stories—Drucilla (Buffy), Lorena (True Blood), Katherine (The Vampire Diaries)—there is a lot of trauma in the beginning. Sexual and mental abuse turns these women into steel that cuts at everyone, even themselves, until ambition is all they can think of because nothing else can provide safety.

Carmilla is a villain, but just like Dracula in this story, the narrative does not erase the root of the villainy.

In her final battle with Isaac, it was an emotional match for me because those are my two favorite characters in the series. It was the kind of anxiety I thought I’d have during the final season of Game of Thrones when my favs would be clashing, except this was actually good.

Isaac has chosen life, to build something new in the world for himself, and Carmilla will never stop wanting more to give herself safety. They can not both exist.

Carmilla fights her damnedest and is a complete boss. Still, she is overwhelmed by Isaac’s night creatures and Hector’s pre-planning on trying to keep her trapped during an escape. But rather than having her life, her blood taken from her, Carmilla ends her own life—not allowing another thing to be taken from her.

It is a great ending to a character I wish had gotten more time, but they made great use of her, and Jaime Murray voicing a character will always make it hard for me not to stan.

This is just one of the great endings in Castlevania, so if you haven’t checked it out, I hope reading this post encourages you to see it as something more than just a show that says f**k a lot.