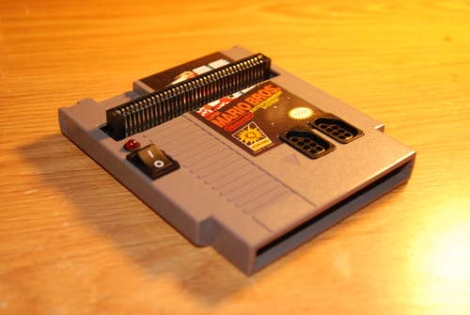 Anyone who has ever opened up an old NES cartridge knows that many of them were mostly empty, with the little board only taking up a small portion of the inside. Well, what better to take up all of that empty space than an entire, working Nintendo Entertainment System? Instructables user danny32412 achieved the above accomplishment by obtaining a Nintendo on a Chip (NOAC) board–which is usually a Famicom packed into a controller with an added game slot–disassembling it, then converting it to work with standard NES games and controllers. He ended up building a custom controller interface board so he could map the NES controller’s buttons to the corresponding pads on the NOAC board, attached a 72-pin NES cartridge slot (as the NOAC came with a 60-pin slot), and added two controller ports and a power switch to finish it off. He gets extra points for testing it out with one of the best NES games ever made, Super Mario Bros. 3.

(Instructables via Hack A Day)