For the Love of All Hallow’s Eve, Let’s Retire the “Nerd Costume” 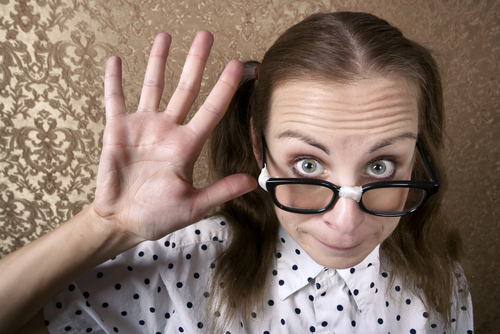 ALERT: we have now entered Halloween Costume Crunch Time! Otherwise known as HCCT, this is a critical time in the Halloween season where it’s too late to buy any good costumes at the Halloween Superstore, but you still need something to secure free candy and/or get into the best parties.

There’s a ton of last minute options you can pursue: a ghost (just use a clean sheet), a picture frame (just cut a rectangle out of some cardboard) or Baby from Dirty Dancing (just carry a watermelon). However, there is one classic last minute costume I see every year that I want to steer you away from: the “nerd” costume.

The anatomy of a nerd costume is pretty simple. Hike your shorts up real high, wear mismatching socks, don huge black glasses with Scotch tape in the middle, stick a “Kick Me” sign on your back, and add some acne spots. If you really want to get into character, spend all night correcting people about Star Wars vs. Star Trek and repeating mathematical equations.

This is bad. Don’t do this. A few reasons follow.

It’s rude: Dressing up as a nerd that still gets stuffed in to lockers reaffirms the idea that all the nerdy stuff we love, like Saga comic books or Harry Potter fanfiction or Kameron Hurley novels, is not and never will be important. Making a joke out of our deep love for this specific type of culture diminishes the value of nerdiness. People work hard and dedicate entire careers and lives to the pursuit of “nerd culture.” Making a costume of a weakling whose interest in nerd stuff is directly correlated with being uncool and unsociable is hurtful.

It’s boring: The nerd costume falls under the case of “try harder” in my book. Some people, like cosplayers (frequently also known to use the nerd identifier), spend months and months preparing their costume for Halloween or a convention. Put some effort in to it! You’re not going to win a contest with a bummer costume.

Halloween is an inherently nerdy holiday: Halloween is one of the best times to be someone or something amazing, and to wow your friends with your pop culture knowledge. When people dress up as characters they like from a popular television show, book, movie, or general phenomenon from the past year, they are showing their interest in a particular subject. This behavior, the extreme love of a character or idea that inspires a person to dress as this character or idea, is already nerdy. Even though that’s a nice sentiment on its face, I’m pretty sure that people dressing up as nerds aren’t doing it as an homage to our greatness.

The regular nerd costume is bad enough, but dressing up as a “sexy nerd” is even worse. The sexy nerd costume is a shorter, smaller version of the nerd costume with added high heels and busty/midriff-showing button-down. To me, the idea of being a nerd is already sexy. Every time the clerk at the comic book store says, “bags and boards?” I need to get new pants.

However, the sexy nerd costume doesn’t feel sexy at all. It’s more of the same nonsense that the regular nerd costume has, but with a sexist twist. Male-presenting nerds are seen as spineless people who are bullied by peers while sexy nerds, who are almost always female-presenting, are seen as timid, sexually naive people one can take advantage of. In both situations of the nerd costume, the end goal is that this type of person can be easily bossed around by others.

Look, don’t be a generic nerd for Halloween. It’s rude and boring and you can do better. If you are really set on being a nerd for Halloween (because imitation is the highest form of flattery, right?) pick a specific nerdy person or character and embody their excellent traits instead. Some suggestions (extra points for zombie versions):

So think outside the box, nerds! What will you be for Halloween this year?

Sarah Beth Kaye is a freelance writer specializing in gender, politics, policy, and lifestyle writing. After graduating from Rutgers University in 2015, she began working on a YA novel that she hopes to publish within the next year. Follow her on Twitter @oheyitsSBK.