“A Lot of My History Sucks”: The Quiet Inclusivity of NBC’s Timeless 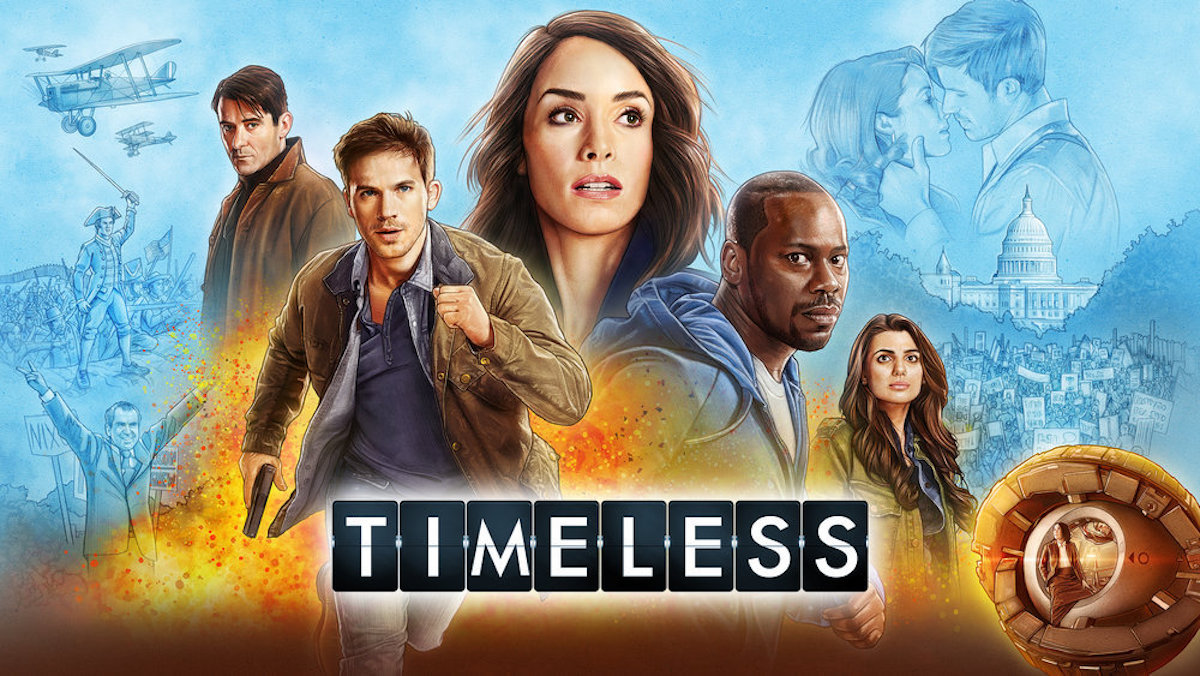 There’s a place on TV where diversity and inclusion are a constant presence, where women and non-white characters aren’t defined by their race or gender, where the “white savior” complex is literally the motivation of the Big Bad, and where all of this happens quietly, with barely any overt socio-political commentary. This place is NBC’s retro-time-travel-adventure Timeless, and I’m as surprised about that as you are.

For those of you who don’t watch—and judging by the show’s ratings, that’s probably most of you—the premise of Timeless is beautifully classic in its simplicity. Connor Mason (Paterson Josephy), a rich, reclusive genius, invents a time machine, which is promptly stolen by a rogue apparently hell-bent on changing history. So the government recruits a team to stop him: Lucy (Abigail Spencer), a history professor, Wyatt (Matt Lanter), a soldier, and Rufus (Malcolm Barrett), an engineer who’s the only person who can pilot the remaining time machine (because, naturally, there’s two of them). They zip through time, have a bunch of adventures and personal drama, and eventually find out the guy they’re chasing is actually trying to stop the real baddy, a shadowy organization trying to manipulate history to its own ends.

Despite this deeply retro premise and style, Timeless shies away from most of the tropes associated with the genre and instead assembles one of the more diverse casts on network TV. Out of the three heroes, only one (Wyatt) is white and male, and Lucy is the de facto protagonist, not him. The main supporting cast consists of a black man (the aforementioned billionaire genius) and two women of color—one of whom, Agent Christopher (Sakina Jaffrey), has the position of highest institutional authority in the entire show.

Timeless is pretty much the perfect counterargument for all those who insist that racism, sexism, homophobia, et al. are acceptable or necessary in historical dramas (or quasi-historical fantasies) because “that’s just how things were back then!” The team has traveled through the past three centuries, and not once has Lucy been threatened with rape—murder and torture, just like the rest of the team, sure, but never once has she been threatened in a gender-specific way. Rufus, meanwhile, has made an art form out of wry commentary on a given era’s racism: “We’re saving rich white guys’ history—a lot of my history sucks.” His takedowns range from the ridiculous (passing off the Fresh Prince of Bel-Air theme song as a Langston Hughes spoken-word poem) to the epic, as when he gave a racist guard this rant in the 1930s in the pilot:

“I’m in a damn Stone Age, but man, I hope you live a long, long life. Long enough to see Michael Jordan dunk, Michael Jackson dance, Mike Tyson punch—really, just any black guy named Michael! OJ? Yeah, he gets off. Oh, he did it, but we don’t care! And Obama, he’s the president. 2008. That’s gonna suck for you! I hope you see it all, because the future is not on your side, boy.”

It’s a show that manages to walk the tightrope between gleeful historical geek-outs and pointed reminders that these romanticized past eras were anything but romantic and glamorous for the majority of the population.

Despite this, Timeless is the kind of show that doesn’t put its characters’ race or gender at the forefront of their storylines. Rufus and Mason’s stories aren’t about being black men, they’re about, respectively, being an engineer roped into a much more active and scary job, and being a billionaire who invented a Pandora’s box of problems. Agent Christopher, the government agent overseeing the missions, never once has her authority questioned on the basis of gender or race—it’s not even implied. Jiya (Claudia Doumit), the team’s tech expert, is the smartest person in the room at any given time, but rarely, if ever, is a fuss made about her being a WOC in a STEM field; we care more about her relationship with Rufus and her time travel-induced hallucinations. And while Lucy’s longstanding will-they-won’t-they tension with Wyatt is a fan-favorite plotline, it never dominates her story or turns her into The Love Interest™. Indeed, I’d hazard a guess that this is precisely why viewers connect with the romantic subplot, because it’s just that: a subplot that evolved organically from characters’ chemistry, rather than being telegraphed from the start.

There’s no questioning that it’s important for there to be stories that are specifically about the experiences of characters who aren’t straight, cis, white men, especially in the sci-fi/fantasy realm, which has such a history of straight white male protagonists saving the day. Shows like Black Lightning, or the late lamented Agent Carter, and movies like Wonder Woman and Black Panther are groundbreaking and spectacularly necessary. But it’s also refreshing, especially in genre TV, to have inclusivity and diversity that’s completely casual. The temptation can so often be to put identity before character in order to make a point about the treatment of a marginalized group, but that can also sometimes have the effect of boxing characters in or allowing writers to feel they’ve done their duty once they’ve included their token minority sidekick.

Timeless isn’t a show about diversity or marginalized groups, but it constantly and deliberately weaves those voices into the very DNA of its storytelling. Even when it comes to historical figures, more often than not, the episodes focus on figures who were part of marginalized communities (Wendell Scott), who are typically considered peripheral characters rather than historical A-listers (Abraham Lincoln’s son, JFK’s mistress), or both. The very concept of the series rails against the idea of “chosen ones” who are so often white male saviors—in fact, the overarching villains are a white-male-dominated organization who seem to think they are the chosen ones to save and “prune” mankind down to its “best” elements—shudder. It might be a retro romp that doesn’t take itself too seriously, but that’s what has allowed Timeless to quietly foreground its diverse voices and unsung heroes.

Amanda Prahl is a playwright, lyricist, and freelance writer with regional and university theater credits, bylines on HowlRound, BroadwayWorld, Slate, and PopSugar, and strong opinions about Doctor Who. Follow Amanda on Twitter @storyologist_ap.