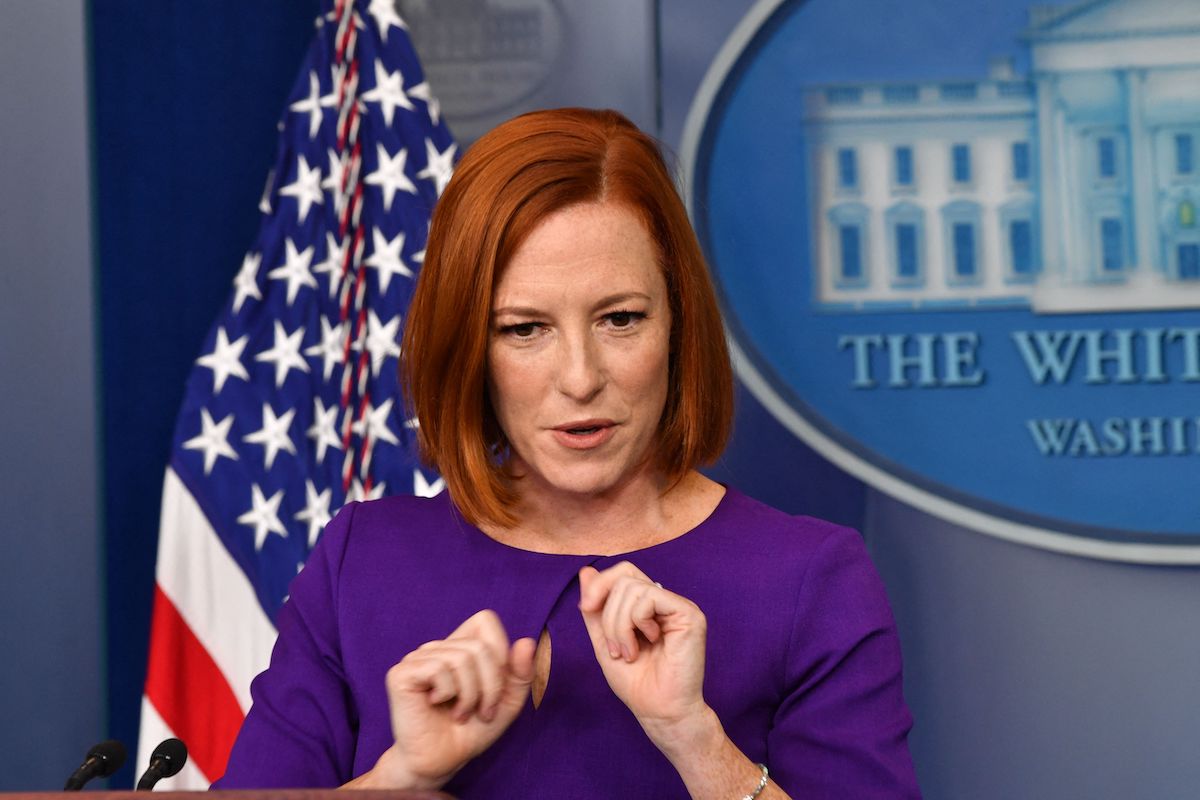 Alexander asked Psaki about “Let’s Go Brandon,” a conservative slogan that is, for the unfamiliar, cutesy code for “F*** Joe Biden.” The phrase originated at a NASCAR event in early October after a reporter seemed to mishear (or tried to cover for) what a crowd was chanting. Since then, it’s made its way to national headlines and even appeared on the floor of Congress.

“Across this country, we’ve seen the new phenomenon lately, chanted at sporting events and on signs, the phrase is ‘Let’s go Brandon,’ a sort of code for a profane slogan attacking President Biden,” Alexander said at Friday’s briefing, asking, “What does the president make of that?”

“I don’t think he spends much time focused on it or thinking about it,” Psaki replied.

But Alexander wasn’t done. Just try to wrap your head around this follow-up:

The president said when he came into office on Inauguration Day, he said he was going to help get rid of the ‘uncivil war’ in this country. So I guess through that lens right now, does the president think that there are things he could do differently? How does he react to the things he sees out there when it is one of his primary promises or desires, to help bring Americans together?

What an utterly bizarre line of questioning from @PeterAlexander — the implication being *Biden* is somehow at fault for the “Let’s Go Brandon” chants pic.twitter.com/j9AwURRzOG

That clip there is from Fox News but Alexander isn’t. He’s an NBC reporter. But he’s got the conservative talking points down pat.

Conservatives write the script and the mainstream media reads their lines. They’re never getting any better. https://t.co/hrD4DoHOtU

I genuinely cannot understand what the point of this question is. When one person says they want to work towards civility and the other side keeps yelling “f*** you” at him, why would you ask that person what they could be doing differently? Who does that benefit? What an absolutely asinine question to ask.

As usual, Psaki handled the nonsense with grace.

“Well, it takes two to move towards a more civil engagement and discourse in this country, and the president is going to continue to operate, as you said, from the promise he made early on, which is that he wants to govern for all Americans,” she said.

“He’s going to deliver for all Americans, as is evidenced by the infrastructure bill he’s going to sign on Monday,” she continued, referencing a bill that itself has been a lightning rod for partisan incivility.

“That’s going to help expand broadband to everyone, no matter your political party, no matter whether you voted for him or not. That’s going to replace lead pipes, make sure kids have clean drinking water whether you’re a Democrat, a Republican, or not political at all. That’s how he’s going to govern and certainly we’re hopeful we’ll have partners to move toward more civil discourse with in the future.”