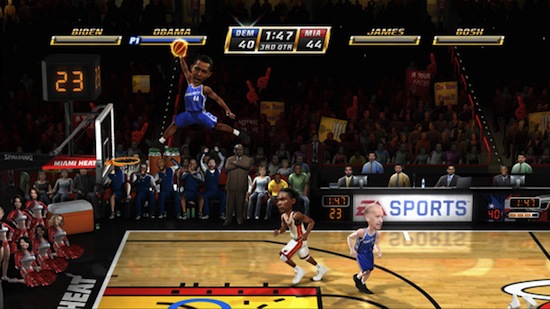 EA Sports’ rebooted NBA Jam hits stores today, and the company has revealed that it’ll be continuing one of the popular basketball gaming franchise’s long-standing traditions: Playable politicians. On the Republican side, you’ll be able to suit up as George W. Bush, Sarah Palin, John McCain, and Dick Cheney; meanwhile, there’ll also be a Democratic roster of Barack Obama, Joe Biden, Bill and Hillary Clinton, and Al Gore.

Will these politicians be able to dunk? You bet they will. And they’ll bring their “dunk faces.”

Just like we have the dunk faces of the NBA players where we grabbed high-resolution pictures of their game faces, we did the same thing with the politicians. We found these pictures that showed off the emotion of all of these politicians, and some of them are classic. Dick Cheney has the Darth Vader snarl. Obama makes some great faces, and the politician dunk faces are some of the best dunk faces in the entire game.

Sarah Palin is hilarious in the game. She has a beehive haircut and a helicopter dunk that is just awesome. She also makes some pretty funny faces in the photos. It’s just good clean fun. We even made logos for the Republicans and Democrats, where the donkey is this bad-ass donkey with a Mohawk, and the Republicans have this cool Elephant.

While NBA Jam is available on the Wii, the XBox 360, and the PS3, the politicians have only been officially confirmed for the Wii version of the game.