Nazi Sympathizer Loses His Job—Good, Take the Rest With You 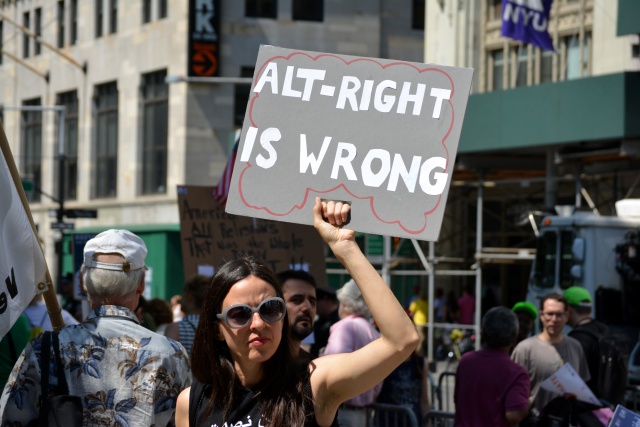 Last Saturday, The New York Times published an article entitled “A Voice of Hate in America’s Heartland” about a white nationalist named Tony Hovater from Ohio. The article got a huge amount of backlash because of how it normalized the alt-right, Nazi-supporting Hovarter. The reporter of the piece, Richard Fausset, and the Times’ National editor, Marc Lacey, both released articles explaining their own personal reaction to crafting the piece and the public reaction to it.

Personally, the article did not shock me, nor did it leave me angry, because I am not shocked that there are white nationalists walking around who can say things like, “You know, I’m coming at it in a mid-90s, Jewish, New York, observational-humor way” about the alt-right without understanding any irony.  Or take this metaphor about how people view white nationalists using the movie Pacific Rim as an example, “So the people, they don’t ask the monsters to stop,” he says. “They build a giant robot to try to stop them. And that’s essentially what fascism is. It’s like our version of centrally coming together to try to stop another already centralized force.”

Or white nationalists who say things like, “At this rate I’m sure the presidential candidate they’ll put up in a few cycles will be an overweight, black, crippled dyke with dyslexia” or that Adolf Hitler “really believed he was fighting for his people and doing what he thought was right.”

These sad, pathetic, ignorant people who act as though the entire world is against them, and claim that society is changing in a way that is looking to topple white people, are so frustrating because they talk quite like poor people of color I know. Their disenfranchisement with the government, feeling like they can never get ahead, feeling like people are taking advantage of the system—those are all things poor people all over this country feel, but just like it has always been, racism is a barrier for creating a true coalition of the poor.

Hovater’s ideas of fascism are a fever dream, an idea that if we could “go back to the way things were” things would get better. That creating a “white-state” would somehow fix all of their social ills. Sure, you go and separate from society using products only things made and manufactured by white people throughout history. Enjoy that.

Disenfranchisement is their excuse for racism, for ignoring history, and pretending as though they have reached some divine enlightenment about the way society works. Never mind that poor working-class people under Nazi rule still suffered under the Third Reich. Never mind that slavery as an institution did nothing in particular to help poor white people—why pay for labor when you are breeding human beings to work for you? Who cares that white people use more welfare than anyone else?

It isn’t about the real truths here; it is about the narrative, and the narrative they are painting is that society has turned against white people (white straight men especially) and they can no longer be proud of their “culture.” I put culture in quotes because Nazis and Antebellum South =/= the bulk of European history, and since those are the aspects they cling to the most, it says more about them than society.

In his personal article, Fausset, the reporter, asks the question:

Why did this man — intelligent, socially adroit and raised middle class amid the relatively well-integrated environments of United States military bases — gravitate toward the furthest extremes of American political discourse?

When you want to believe that you are the victim, it doesn’t matter what statistics you are shown, you can create a narrative in your mind. In an episode of “This American Life” titled “Fear and Loathing in Homer and Rockville” they spoke to a man from Homer, Alaska named Ben Tyrer, who when a vote was coming around about illegal immigration (an issue that literally did not exist in that town) did research to see about how he felt about the issue. When asked by the reporter from TAL about if he came into his research with an open mind, he said:

“If we’re being honest, I didn’t have an open mind about it. But I knew that, and I knew that that’s not a good thing to have if you are trying to have an actual view of what’s going on in the world instead of just what you want to have going on in the world. So I kind of took it upon myself to question– actually question– everything that I think.”

He stayed away from The New York Times and The Washington Post because they had a “bad rap” and he also stayed away from conservative sites like The Rebel. However, the bulk of Tyrer’s information came from Breitbart, as well as the Gatestone Institute, a right-wing think tank with anti-Islam bent. Tyrer used those two heavily biased sites to solidify his opinion and shared his information during the council meeting about immigration, claiming that “facts outweigh emotion.” Now to be fair, Tyrer felt conflicted about his emotions on the issue, but he also used those emotions to feed his own sub-conscious fears and biases he had. Alt-right sites delivered the information wrapped up as facts, and he devoured it.

It is painfully easy for people to be swayed by fear, misinformation, and their own personal biases to buy into an agenda that tells them: this will keep you safe, this will make you powerful. But that isn’t an excuse. Thankfully, throughout the course of the episode, Tyrer realizes the mistakes he made, but by that time he’s already done damage.

Unlike Tyrer, Tony Hovater is a foot soldier in the alt-right and has participated in the rally at Charlottesville. He is garbage. Which is why the fact that he was fired from his place of business after the article came out is not something I have any empathy for. In fact, this could just make it that much easier for them to go off the grid and join their white co-op.

Once you decide that Hitler was “was a lot more kind of chill on” the subjects of killing homosexuals and Slavs in comparison to Himmler, you reap what you sow. This isn’t about Republican and Democrats. This is about Nazis and white nationalists vs. everyone else, and I’m solidly team everyone else. Have fun with your racist version of Go Fund me.

Fausset wants to know, “What makes a man start fires?” I say: it’s too late for that, how do we just put them out?