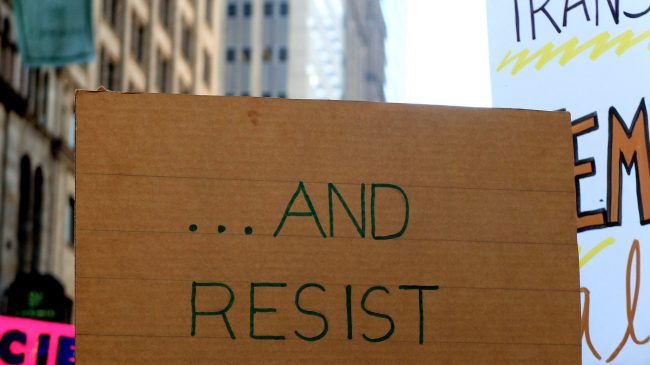 After Nazis marched onto the University of Virginia campus on Friday night’s “Unite the Right” rally (read: white supremacist rally), one nearby synagogue tried to appeal to the Charlottesville police department for protection for its attendees. Their request for extra protection ahead of Saturday’s events was denied, and the synagogue was forced to hire an armed security guard from a private company to protect people as they worshipped.

Alan Zimmerman, president of Congregation Beth Israel in Charlottesville, described what followed that day as the assemblage of Nazis and white supremacists marched past their synagogue.

For half an hour, three men dressed in fatigues and armed with semi-automatic rifles stood across the street from the temple. Had they tried to enter, I don’t know what I could have done to stop them, but I couldn’t take my eyes off them, either. Perhaps the presence of our armed guard deterred them. Perhaps their presence was just a coincidence, and I’m paranoid. I don’t know.

Several times, parades of Nazis passed our building, shouting, “There’s the synagogue!” followed by chants of “Seig Heil” and other anti-Semitic language. Some carried flags with swastikas and other Nazi symbols.

Imagine it for a moment, will you? Just imagine standing outside of a peaceful synagogue (wherein 40 people were worshipping, according to Zimmerman), watching as Nazis march outside, not a stone’s throw away. And really, make no mistake: these were Nazis marching in Charlottesville on Friday and Saturday. I shudder to think what might have happened had Zimmerman not been able to pay for an armed security guard.

There was apparently a close call, though, as Zimmerman describes a particularly worrying incident. He wrote:

A guy in a white polo shirt walked by the synagogue a few times, arousing suspicion. Was he casing the building, or trying to build up courage to commit a crime? We didn’t know. Later, I noticed that the man accused in the automobile terror attack wore the same polo shirt as the man who kept walking by our synagogue; apparently it’s the uniform of a white supremacist group. Even now, that gives me a chill.

The automobile terror attack Zimmerman references here is the attack in which James Alex Fields Jr., plowed his car through a crowd of counter-protesters gathered to demonstrate against the Nazi groups assembled in Charlottesville. There’s no telling whether this person outside the synagogue would have also tried to do something equally heinous, but really, that’s kind of the most horrifying part of this all, isn’t it?

It seemed likely, though, as Zimmerman found out later:

Soon, we learned that Nazi websites had posted a call to burn our synagogue. I sat with one of our rabbis and wondered whether we should go back to the temple to protect the building. What could I do if I were there? Fortunately, it was just talk – but we had already deemed such an attack within the realm of possibilities, taking the precautionary step of removing our Torahs, including a Holocaust scroll, from the premises.

It’s a scene that could have been pulled right out of a history book, really. But the tragic, scary thing about it all is that it isn’t history—it’s the here and now. It’s the world we live in right here, and the threat is literally standing right outside your door. I don’t mean to sound like seriously every other writer covering Charlottesville right now—I don’t want to scare you into some kind of action, though let’s be honest, any action in defense of innocent, marginalized people is welcome right now.

Rather, what stuck out to me was one important point that I think lies at the heart of this (still awful, still terrible) near-miss: it took assistance from local friends and allies to buff the protection available to the synagogue. In the end, it wasn’t the police who could help—admittedly, they had their hands full—it was the synagogue’s neighbors. Zimmerman wrote:

John Aguilar, a 30-year Navy veteran, took it upon himself to stand watch over the synagogue through services Friday evening and Saturday, along with our armed guard. He just felt he should.

We experienced wonderful turnout for services both Friday night and Saturday morning to observe Shabbat, including several non-Jews who said they came to show solidarity (though a number of congregants, particularly elderly ones, told me they were afraid to come to synagogue).

A frail, elderly woman approached me Saturday morning as I stood on the steps in front of our sanctuary, crying, to tell me that while she was Roman Catholic, she wanted to stay and watch over the synagogue with us. At one point, she asked, “Why do they hate you?” I had no answer to the question we’ve been asking ourselves for thousands of years.

At least a dozen complete strangers stopped by as we stood in front the synagogue Saturday to ask if we wanted them to stand with us.

It’s just straight up heartening to see so many people, Jewish or not, step up to just do the right thing and help protect innocent lives. Where the police fell short (for whatever reason), everyday private citizens pick up the slack to stand up against hate. While white supremacists and Nazis gather and speak about making their presence “finally known,” it becomes even more important for us to show that we who stand against hatred were already here, we’re still here, and we will always be here.

I wonder, sometimes with abject dread, what new incident will end up inspiring more people to call for solidarity and unity in the face of hatred. I wonder whether we’ll ever reach a point where we just don’t have to call for it anymore.

I’ve said this before, but I’ll say it again.

It can indeed feel foolish, if not downright naive, to try to look for hope in such frightening times. But it’s in that search, that reach for something better that we often find reason to go on.

from Howard Zinn’s ‘You Can’t Be Neutral on a Moving Train’ (& other books) pic.twitter.com/knFvTKs6Aj

Terror, fear, intimidation, browbeating—these tactics are being used to destroy any semblance of momentum or movement towards change. And it’s in that death of momentum, it’s in that complicit silence that Nazis find safety and comfort where there should be none for them whatsoever. God, it feels like such a cliché to say now, but truly, hope is something worth protecting, it’s something worth holding on to. But more than that, hope is something worth showing, it’s something worth demonstrating with every fiber of your being. And whether your hope looks like standing with counter-protesters, donating to their cause, or straight up punching a Nazi, know this: it’s a hope worth celebrating, worth appreciating, and worth demonstrating over and over and over again.

Especially that punching Nazis-type of hope. Keep doing that.