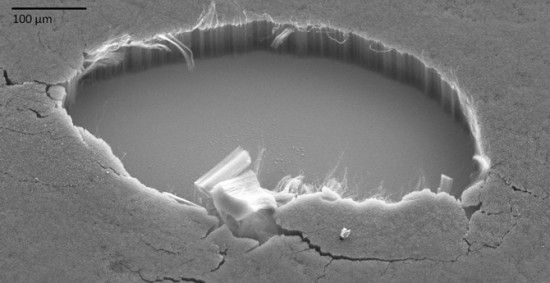 In a bid to go beyond the impossible, NASA has created a material that is blacker than black. Sort of. The material, comprised of something like a shag carpet of carbon nanotubes, boasts a ridiculously high light absorption rate of 99.5% in the visible and ultraviolet ranges. It’s not as good with far-infrared bands, dropping to a still respectable 98% or so. Plenty of other people have been working on similar materials, but NASA blows competitors out of the water.

Pfft, big deal right? Actually, kind of. Extremely light-absorbent materials have more space-uses than you might think. As it turns out, many space-speriments involve monitoring light levels, and when there’s too much extra light bouncing around, it can really screw up the space-results. Up until now, astronauts have been using black space-paint to try and absorb garbage light, but could only soak up a paltry 90% or so of the light that way. In addition, fun fact, black paint behaves differently when you use it in space; it doesn’t stay black. Instead, it adopts a luminous, silverish hue. Weird, right?

Also, with the ability to suck up infrared light, the material can be used to keep certain sensitive space-instruments cool, which allows for much more reliable space-readings. Too boot, it can just generally be used to soak up garbage heat everywhere and ensure that it gets sent out into the depths instead of towards things that need to stay cold.

Perhaps the only major downside to this material is that it does not yet have a name, so for the time being, everyone has to refer to it as “this material,” which gets more than a little bit annoying. Outside of that, it looks extremely promising for future space-sploration. Granted, this comes now that the Space Shuttle is being phased out, but some day — hopefully — we’ll be doing all kinds of space-tivities again, and this material, which will presumably have super catchy space-name by then, will be a big help to everyone involved.