The Possible Water Flows on Mars Are Nothing New, Chill, Internet

OLD. (Am I doing Internet right?) 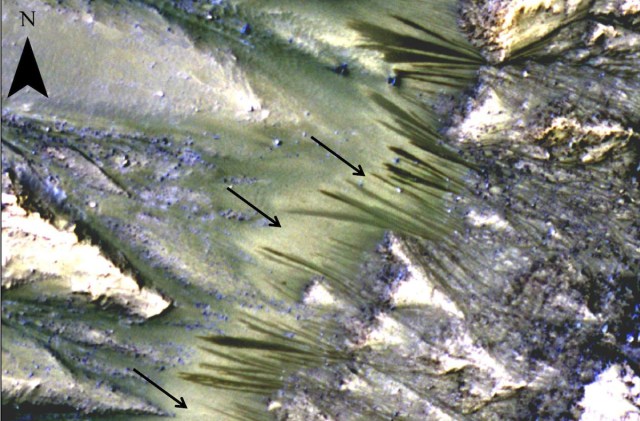 NASA’s Mars orbiting spacecraft have sent some new information about the dark streaks, or recurring slope lineae (RSL), on the surface of Mars, and people have gotten a little excited, because water on Mars could mean life on Mars. If you got out your alien party hat, you’re a bit late, because the RSL were first announced in 2011.

Yes, there is new data that could mean water, and it was published in Geophysical Research Letters (along with part two). However, the new data doesn’t do anything to confirm that the RSL are caused by water, which means that scientists are still in the same spot they’ve been in for years. They suspect that the RSL may be caused by water, which is exciting, but it’s nothing new.

For those who are late to the Mars water party, which sounds like the worst party ever (seriously, it’s cold up there), the RSL are dark streaks that appear on slopes when Mars temperatures reach their warmest, and scientists have been investigating to see if they’re caused by water flowing from beneath Mars’ surface.

In the new research announced just yesterday, NASA scientists found signs of changes in iron mineral content on the surface around the RSL, and those changes “support a suggestion that brines with an iron-mineral antifreeze, such as ferric sulfate, may flow seasonally, though there are still other possible explanations.” (Emphasis ours.)

However, the announcement goes on to say that no direct signs of water or salt were found, so while the new findings fit with scientists’ current theories about the RSL, they still don’t have anything concrete. Lujendra Ojha, the lead author of the new reports, said, “We still don’t have a smoking gun for existence of water in RSL, although we’re not sure how this process would take place without water.”

Sure, water on Mars is a pretty exciting prospect, and it’s definitely good to know that the new findings fit into what scientists already think is going on up there. Just don’t get too excited, because this is just a minor part of a years-old discovery, so if you were hoping we were about to find some Mars water-living alien life, you might want to prepare yourself to wait a little longer.

Or maybe let’s just wait forever, because we all know what lives in Mars water.

(Very excited about the prospect of Mars water.)

(NASA via Space.com, image via NASA)