Usually, watching a NASA rocket launch from your home is something reserved for Floridians, but tonight, that’s an honor offered to a huge swath of the Northeastern American coast (if those pesky clouds stay out of the way). So if you find yourself gazing towards the Wallops Island Flight Facility in Virginia (as you often do of an evening, longingly, and with hope fluttering in your heart), and you see some scattered red contrails, know that we are not being invaded by aliens.

It’s just NASA running space tests on our upper atmosphere! In fact, if you live anywhere within the yellow circle below, you’ve got a chance at seeing it: 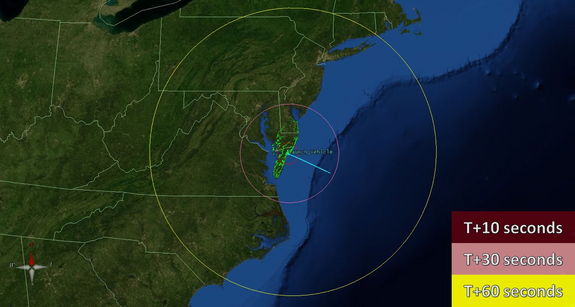 The rocket, carrying a payload of thermite embedded with pieces of solid metal lithium, has a planned launch window of 5:30 to 6:30 pm Eastern Standard Time, with an ideal launch time of 5:45. Once the rocket is out over the Atlantic and very, very far away from Earth (but not far enough to reach orbit, as that’d take a somewhat more robust rocket), the thermite will be ignited, causing the lithium to to vaporize, and the rocket will release the reddish trails so high in our atmosphere that they’ll be illuminated by sunlight… even though the sun will appear fully set at ground level everywhere that the trails will be visible.

The shape of the contrails over time will give scientists valuable information about wind speed and direction in our electrically turbulent upper atmosphere. But they’ll also be testing the lithium vapor itself. Says Libby West, mission project manager at Wallops, says:

This launch is a technology test flight for two upcoming missions. We will be testing two different methods for creating the lithium vapor to determine which configuration is best for observing various science phenomena in space.

Space.com has a handy chart in this post that’ll let you know where to look to find the red rocket’s glare in direction and degrees above the horizon. Just remember my astronomy 101 professor’s tricky to figuring out degrees above the horizon without any special equipment. Hold your fist out upright and at arms length. Align the bottom of it with the horizon as you see it: that’s about ten degrees. Stack your fists up the sky until you’ve reached approximately the right number of degrees and your neighbors think you’re really weird.