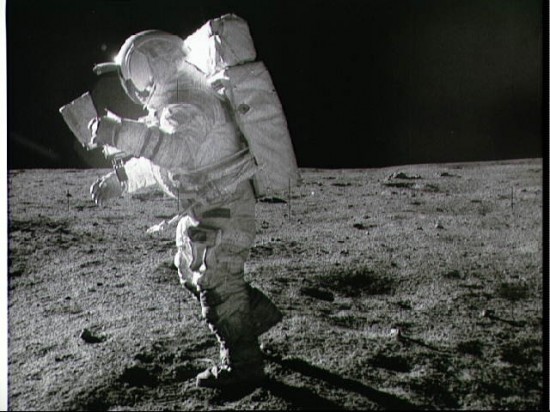 The U.S. government has initiated a lawsuit against a former NASA astronaut to recover property used on the Apollo 14 moon mission. In question is a camera used during the 1971 mission that was brought to the attention of NASA after it was placed up for sale in a New York auction. Edgar Mitchell was the lunar module pilot for Apollo 14 and is the sixth man to have walked on the moon. He claims the camera is rightfully his, and is part of his personal collection of memorabilia.

The lawsuit was filed in Miami federal court and accuses Mitchell of illegally possessing the camera and attempting to sell it for profit. NASA reportedly learned the camera was in Mitchell’s possession after the British auction house Bonhams announced plans to sell the camera at a Space History Sale billed as one of the two cameras from Apollo 14’s lunar module Antares. The camera was expected to fetch between $60,000 and $80,000.

The lot description for the camera labelled it as a “Movie Camera from the Lunar Surface” and describes it as having come directly from Mitchell’s personal collection. According to the lawsuit, all equipment and property used during NASA missions is property of NASA unless explicitly given to another party. NASA has no record of the camera ever being given to Mitchell as a gift or a token for his service, and thus claims it is still rightfully government property.

Mitchell is sticking by his story that the camera was given to him after the mission was completed more than 40 years ago. Through his lawyer Donald Jacobson, Mitchell has said that NASA was aware of his ownership of the camera the entire time, and that objects from the lunar trips were routinely presented to astronauts as gifts.

The auction house withdrew the camera from sale when it learned that there was a dispute about the rightful ownership. The lawsuit, which is still pending, seeks to stop Mitchell from selling the camera to anyone, orders him to return it, and to declare that the United States government has the exclusive rights to the camera. Objects that are related to the lunar missions can fetch a significant amount of money, and NASA routinely polices the market for unauthorized sale of memorabilia, which seems to be a common occurrence.

In addition to equipment like the camera there is also a market for moon rocks or dust particles, which NASA also monitors closely. Recently, NASA stopped the auction of moon dust from the Apollo 11 mission in St. Louis, that was part of a similar dispute where the government claimed the dust had been taken unrightfully, and NASA employee Terry Slezak claimed to have been given the dust as a gift. Slezak says the dust was given to him because he was the first person to touch moon dust with bare hands while he was unloading a camera that Neil Armstrong dropped on the moon.

(via Reuters Photo via NASA)