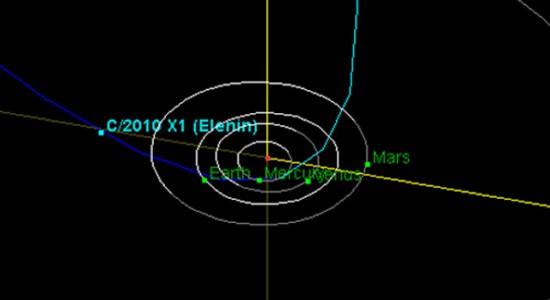 You know the Internet is getting carried away with itself when NASA has to issue a press release just to assure everyone that we aren’t facing armageddon. What seems to be a rather insignificant story about a comet passing close (but not too close) to Earth has gotten wrapped up in doomsday predictions and run-for-the-hills hysteria. Never fear, life as we know it isn’t about to end. At least, not from anything that has to do with the Comet Elenin, which is set to pass by Earth some 22 million miles (35 million kilometers) away during its closest approach on Oct. 16, 2011.

The comet, more formally known as C/2010 X1, was first detected on Dec. 10, 2010 by Leonid Elenin in Lyuberts, Russia using images obtained from an observatory in New Mexico. Since then, Comet Elenin has been on track to pass by Earth on its way to perihelion, its closest point to the sun. While television and movies have made comets approaching Earth something to be incredibly weary about, NASA reports that there will be no influence in any way on Earth due to the comet’s passing.

NASA was bombarded with so many questions from people anticipating annihilation that they felt it necessary to issue a special press release to point people in the direction of a question and answer document compiled by NASA scientists. Don Yeomans of NASA’s Near-Earth Object Program Office at NASA’s Jet Propulsion Laboratory, and David Morrison of the NASA Astrobiology Institute at the NASA Ames Research Center answered questions related to the comet and dispelled fears about its approach.

“Comet Elenin will not only be far away, it is also on the small side for comets, and comets are not the most densely-packed objects out there. They usually have the density of something akin to loosely packed icy dirt. So you’ve got a modest-sized icy dirtball that is getting no closer than 35 million kilometers [about 22 million miles). It will have an immeasurably minuscule influence on our planet. By comparison, my subcompact automobile exerts a greater influence on the ocean’s tides than comet Elenin ever will.”

The scientists also point to the fact that the information about Comet Elenin was never a secret, it just wasn’t talked about widely because, well, these things happen often enough with no consequences that it isn’t really news — until people start freaking out that we’re all going to die, then its news and we get NASA press releases saying everybody calm down. So, everybody calm down, it’s just a comet.

(via Slashdot, image via NASA)