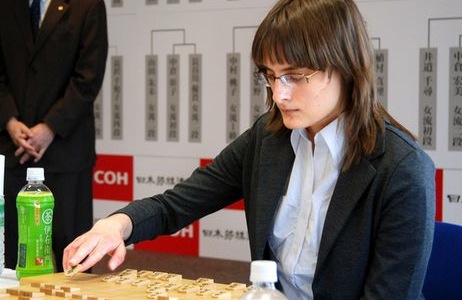 Okay, so when we say “Japanese chess,” we mean shogi, but “Japanese chess” is the most succinct way to explain the two thousand year old strategy game based on a gridded board filled with pieces representing kings, generals, chariots, and soldiers. Naruto, the series of manga, anime, and movies, features characters playing shogi not-infrequently, being set in a fantasy version of Japan. It’s no wonder that someone might become interested in the game after watching the series. After all, it’s a real game with real rules, not like some we could name.

In fact, 20-year-old Karolina Styczynska‘s road to shogi championship began with Naruto, and this weekend she achieved something of a global milestone.

But it’s still pretty impressive! Professional and amateur dans are offset from each other, making professional 3-dan eight ranks about amateur 4-dan. Styczynska was defeated later in the tournament by a player of professional 4-dan ranking.

Styczynska’s opponents had ten to twenty years of experience on her, so we’d say she’s got plenty of time to brush up on her game. And on the newest Naruto trade.