Nancy Pelosi Got Tired of Being Talked Over, Straight-Up Asked Her Colleagues “Do the Women Get to Talk Around Here?”

"There was, at last, silence, and she was not interrupted again." 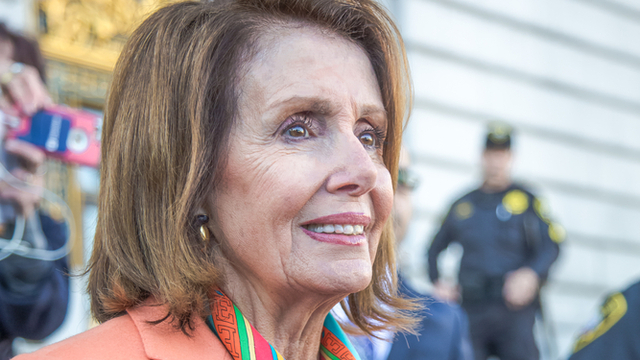 In a dinner at the White House, Nancy Pelosi found herself in a situation that most women will find all too familiar. Someone asked a question. She had an answer. And when she started to respond, a bunch of men kept talking over her.

Pelosi was the only woman at the dinner meeting Wednesday where Trump and Democrats discussed an agreement on DACA and border security. (An agreement which, once announced, Trump almost immediately contradicted.) At one point, Commerce Secretary Wilbur Ross asked what Trump would get out of the deal made with Democrats.

Pelosi attempted to explain that by cooperating with Democrats, Trump could earn future cooperation in return, on any number of issues. But, as the Washington Post writes, “the men in the room began talking over her and one another.”

“Do the women get to talk around here?” Pelosi interjected, according to two people familiar with the exchange.

There was, at last, silence, and she was not interrupted again.

Look guys, Nancy Pelosi doesn’t have time to politely tiptoe around your feelings. She’s the goddamn House Minority Leader and if she wants to answer a question, she’s going to do it.

Even more than her fantastic bluntness, though, I’m stuck on the next line. I am for sure going to need “There was, at last, silence, and she was not interrupted again” on a t-shirt, a bumper sticker, and a framed cross-stitch in every room of my house. I’ve found my new meditation mantra. Put it on my tombstone.

As far as feminist political battle cries go, that might be up there with Nasty Woman and “She was warned. She was given an explanation. Nevertheless, she persisted.”