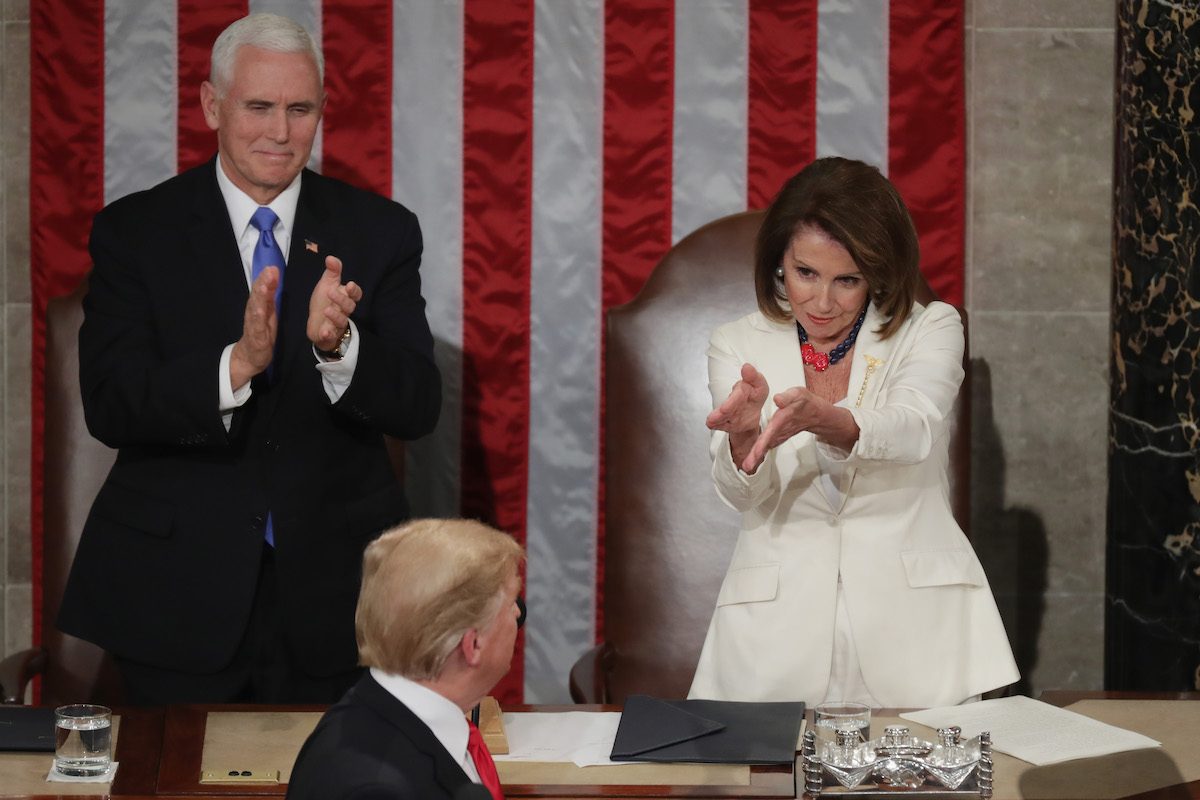 As predicted, Donald Trump’s State of the Union Address was a total waste of nearly an hour and a half. He talked about his stupid wall, he lied about abortion, and, as we’d been told he would, he called for unity between parties.

“We can bridge old divisions, heal old wounds, build new coalitions, forge new solutions,” he said. Which sounds great, but is ultimately empty rhetoric when coming from the man who, in the same speech, spoke of a nonexistent “tremendous onslaught” of undocumented immigrants, spoke of Virginia’s Democrat governor as supporting the “execution” of babies, and essentially said the Mueller investigation is the biggest threat to the American economy.

So when Trump calls for “cooperation, compromise and the common good,” the obvious reaction is, you first. And amazingly, that’s the sentiment Nancy Pelosi, positioned for the speech right behind Trump’s left shoulder, managed to get across with no words, but only her aggressively pointed applause.

The hands like arrows, the extended eye contact–There was absolutely no mistaking her message.

Congrats to @SpeakerPelosi for inventing the “fuck you” clap. #sotu pic.twitter.com/eueoUf9IBT

When men think they do a good job talking pic.twitter.com/kQc9za0EfL

Nancy Pelosi, a montage of polite disdain with a side of shade:

(Reuters and pool via Reuters) pic.twitter.com/jPDQPrySYU

Here’s a longer video, with context.

For context, here’s where Pelosi delivered that clap #SOTU pic.twitter.com/vxnCdtcEeI

That wasn’t the only time during his speech that applause was used against him. At one point, Trump attempted to brag about his accomplishments regarding women’s issues. “No one has benefited more from our thriving economy than women, who have filled 58 percent of the newly created jobs last year,” he said, and he seemed genuinely surprised when a number of female Democrats, all clad in white, stood and cheered.

“You weren’t supposed to do that,” he kind-of joked. He then went on to note that there are currently more women serving in Congress than ever before. At that, the women jumped up and cheered even louder. And Trump just stood there and beamed as if that fact weren’t a direct response to his personal and political acts of misogyny.

Trump points out that there are more women in Congress than ever, and the Democratic women give that a thunderous applause. He has so little self-awareness that he doesn’t understand that this movement was a direct response to him. pic.twitter.com/QimTk21tTM

Women ran for office in record numbers, in large part, because of Trump. But not in any way he should be proud of. He didn’t inspire them. He outraged them.

blithering idiot: “These women were cheering for Trump!”

These women were cheering for women.

So sure, thank you, Trump. Thank you for being so abhorrent that you motivated all these incredible women to run for office. We cannot wait until this all comes full circle and those women are the ones to impeach you.