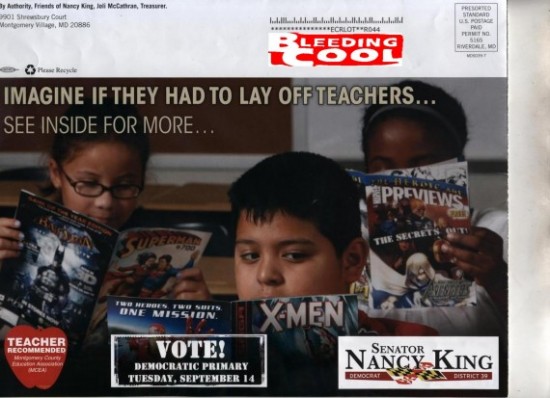 Maryland State Senator Nancy King is running for reelection on a platform of education reform, and her ill-thought out direct mailer is slightly confusing for a moment, and then, once its meaning is fully grasped, starts raising the blood pressure of anyone who has ever worked in or enjoyed the fruits of sequential art.

It implies, for the record, that if children don’t have teachers to educate them, they will start reading comic books.

Fortunately, our incoherent rage has been preceded by some very coherent people.

Like the Maryland Comic Book Initiative, a partnership between the Maryland State Department of Education and Diamond distributors that aims to “introduce and encourage the use of award-winning and other credible graphic novels and comic book materials in classroom instruction… to enhance reading instruction by motivating students to read more and better.”

Or this open letter to Senator King by comic writer and artist Dean Trippe, which can only be described (by this product of New Jersey schools) as an “Oh SNAP” moment.

Attacks on my industry have always come from those who haven’t picked up a comic, and the policies that have damaged our educational system always come from those who haven’t set foot in a classroom in decades. So let me recommend to you the anthology Reading with Pictures, part of a non-profit effort to offer students and teachers comics specifically suited to lesson plans on variety of subjects. Comics combine art and literature to create an incredible new art form. And in fact, telling stories in pictures predates the written word and is used in safety instruction labels precisely because of its ability to simply convey ideas and actions. Your offensive mailer is just another wrong-headed generalization, attacking a genre that gives children heroes that don’t kill (like Superman, seen in the image you used, likely without the rights to do so) and fight against intolerance (like the X-Men, also featured in your mailer, presumably without permission), as well as a medium that anyone, including children, can tell stories in with tools as simple as a pencil and paper.

The problem with the mailer is not simply that King has clearly never given a comic book serious consideration, but that she seems to have lost touch with the teachers she hopes to represent.  I would guess that most teachers, when looking at the image above, don’t see children whose minds are atrophying.  They see kids who, though they are not being taught, are still reading, and enjoying it.  Any educator worth their salt won’t turn up their nose at that.

Besides, we all know that if kids didn’t have school they’d just sit around playing video games all day, amirite?  Get with the times, Senator.

And hey!  If this pisses you off as much as it does us, go read a comic book in public tomorrow!