This Nancy Drew Reboot Better Be Queer As Hell, Or I Will Be Mad As Hell 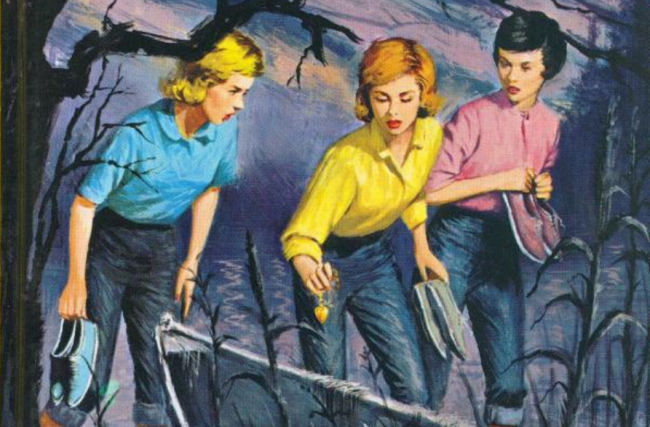 The Nancy Drew reboot has been – well, rebooted. Though CBS was originally slated to adapt this iconic girl detective series for TV, NBC has picked it up and taken it in a new direction. According to Variety, the new imagining will take a bit of a Castle spin and “follow[…] the author of the most famous female teen detective book series who is thrust into a real-life murder mystery. In need of help, she turns to her two best friends from childhood, who were the inspiration for all those books, and the women who have a real axe to grind about the way their supposed best friend chose to portray them all those years ago.”

I have to assume, having grown up reading the Nancy Drew books, that these “two best friends from childhood” will be George and Bess – and here’s where I’m hoping the TV series doesn’t make the same mistake that the books did. Please get rid of the harmful ’30s-’50s artifacts – the absence of people of color, the “jokes” about Bess’s body and relationship to food, the hang-ups around getting dates – but there’s one retroelement I’m hoping they keep. In the older books, George is…definitely not a cis heterosexual. But when they relaunched the series for the ’80s and ’80s, her gender presentation was suddenly a whole lot more heteronormative.

Can we instead keep the queerness, please?

George was always my favorite of the Nancy Drew trio growing up, because while Nancy was a fellow redhead (or “titian-haired,” as they so quaintly wrote it) and therefore my natural favorite, she wasn’t an awkward, Anne of Green Gables redhead. Nancy was pretty, and levelheaded, and cool. I wanted to be Nancy, but I related most to George.

George was the grumpy one with the short haircut (my future epitaph), described in The Secret of the Wooden Lady as being “as boyish as her name. Her hair was dark, her face handsomely pert.” She was the muscle of the three, shouting things like “Look at my brawn!” and poo-pooing at Bess whenever she got too nervous about an investigation. Her body language is lively and aggressive; she’s mouthy and forever falling over hedges and losing things.

But George wasn’t just adventurous and tomboyish; she was butch. In The Secret in The Old Attic, Nancy actually warns her, “If you have much more hair cut off, people will think you’re a boy.” George particularly hates when people try to modify her name to femme it up: “Woe to the person who called…Georgiana or some other feminization of her name!”

Now, you can read George in a variety of ways. She hated being called by a feminine name, and she’s so frequently described as “boyish” and wearing “simple clothes” that she could also easily be read as a trans man, or genderqueer. She dates men, if casually and mostly off-page, so she could be bisexual. You construct the meaning as you read, and I buy all of those. But the one interpretation of George I still do not buy is a heterosexual cis woman. (Though I concede that you, as a reader, are entitled to disagree with that…and be wrong.)

And yet, the ’90s books tried to revise her, trading her “boy” haircut for “short, curly, dark-brown hair [that] was full of bounce” and giving her more a more fixed interest in dating and dudes. I remember being actively annoyed at the more accommodating, boy-happy George of the relaunched books. I even drew up a ridiculous grumpy list in my diary of which Nancy Drew mysteries I liked and which I did not, so I’d remember. I already had plenty of other heroines – who I loved! – to read about who were like this new George. I wanted the butch girl who ditched her date to go solve mysteries with other women.

So here’s the thing. This new TV adaptation has a choice to make as it adapts these two versions of the source material. Either they can embrace all the queer undertones of the older series, or they can lean into the hetcon-retcon. In a world where we’re still hungry for LGBTQIA representation, where a man who “jokingly” hates queer people is one unstable heartbeat away from the presidency, could we please err on the side of representation? Can we let George Fayne be grumpy, boyish, bold and queer?

(Via Variety; image via Grosset & Dunlap)