N.K. Jemisin on the First Rule of Fanfiction | The Mary Sue

N.K. Jemisin Reminds Us of the First Rule of Fanfiction 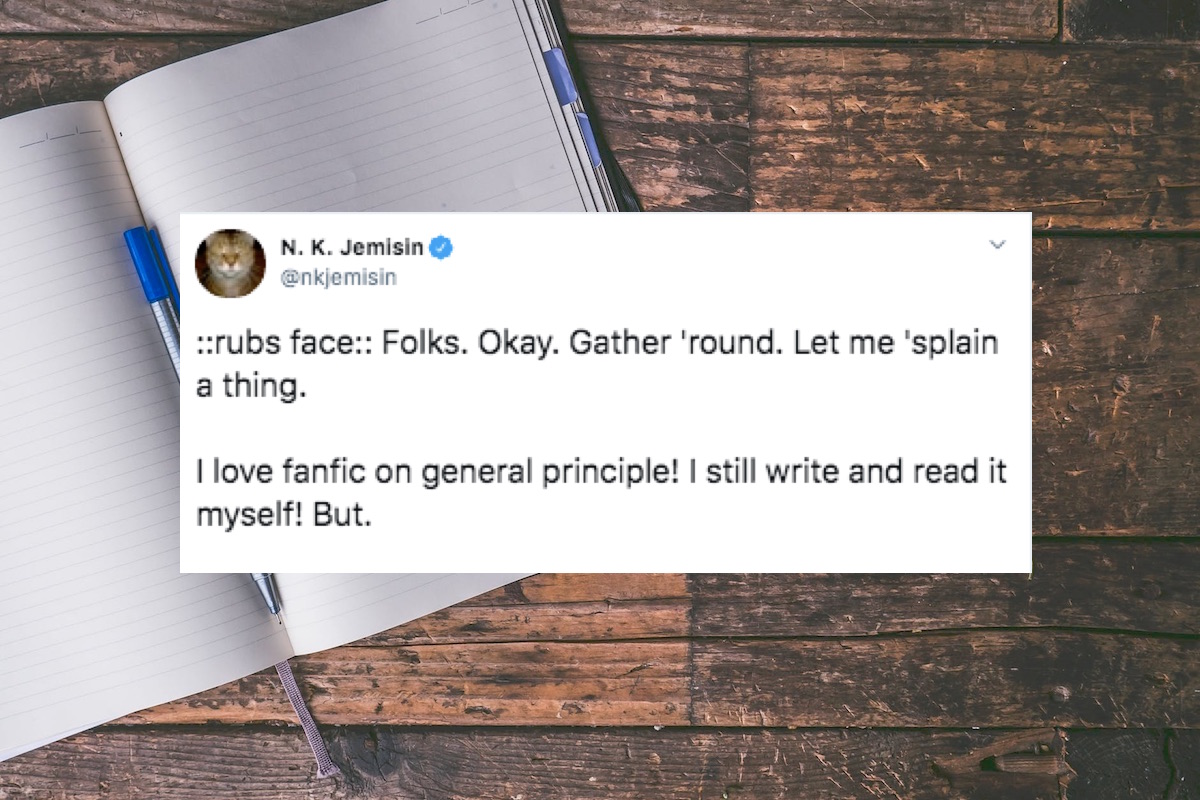 I love fanfic on general principle! I still write and read it myself! But.

Stop sending me your fanfiction of my stuff.

I have repeatedly pointed out that I cannot read fiction based on my own works. This is for your protection as well as mine! Ideas can’t be copyrighted but language can be, and adaptations of my stuff probably use some of mine. Stop sending me shit.

That Jemisin needs to explain this essential “rule” demonstrates how much the landscape of fan-created works has changed. In many ways, it’s for the better. Twenty years ago, when I was a young writer just starting to dip my toes into the world of fic, misunderstanding of fanfiction online was rampant. Transformative work creators and archives were sometimes threatened with legal action by studios and authors, and a general culture of fear and “please don’t sue us” pervaded communities.

It was standard to include disclaimers on stories, attesting to the fact that you did not own the world and the characters, that no profit was being made, and even adding that overt plea not to be sued. These days, with a wider acceptance of transformative works—and many studios and authors even encouraging their production, understanding that a devoted fandom and fanworks can make for good PR—such disclaimers and fears have faded. And thanks to the work of pioneering transformative work advocates like those behind the Organization for Transformative Works, which powers Archive of Our Own, fans have more stable spaces and legal protection themselves.

As a result of our more mainstream embracing of fanfiction, however, it appears that many new fans have not gotten the memo that your favorite author or screenwriter cannot read your story set in their world. The instinct to want them to do so is understandable. I’ve been there myself many a time, especially when I was a teenager. You’re enamored of someone else’s world, and you want to show them just how much you adore and understand it. The problem is that legally, these creators are barred from reading your stuff. The burden of legal risk is now shifted their direction.

Not ideas, but phrases. Writers are mental packrats. We collect turns of phrase here, cool words there, and we don’t always remember where they came from, or even that they aren’t ours. So the best way to avoid lawsuits by fans — it’s happened — is to avoid reading fanfic.

On Twitter, Jemisin’s excellent thread outlines this principle for fans—several of whom are sending fanworks inspired by her worlds directly to her. This isn’t the first time that Jemisin has made mention of the topic. But there are always newly-minted fans—or stubborn ones—who need to hear the message reiterated.

When it’s her own work being transformed, it doesn’t matter what form it takes. She still can’t take a look at it.

It doesn’t matter if you do it in the form of a screenplay, or a “free-form poem as part of a visual art exhibit,” or whatever. If I see it, I’m going to tell you not to do it. I am not going to give you my blessing. And if you *send it to my inbox,* I’m likely to see it. Stop.

At any given time, my agents — including film agents — are actively shopping my works around to Hollywood and other adaptive media venues (comics publishers, audiobook publishers, etc.). You want to see my works adapted, right? Me, too! So stop sending me shit.

In explaining how these things are, Jemisin is not discouraging fans from making their own fanworks centered around her creations. She just cannot be personally involved, and it’s a serious breach of fandom etiquette to ask.

I genuinely love your enthusiasm, folks. I’m flattered to know that a fandom exists for my work! But there’s a way this has to work. A social contract, so to speak. Your end of it is super-simple: DO. NOT. SEND. ME. YOUR. FANFIC. OF. MY. STUFF.

She also taps into a very current Mood of exhaustion from older members of fandom who find ourselves in an altered Internet sandbox than the ones we used to know.

Brought to you by the Old-School Fandom Cranky Grumble, “In My Day We Didn’t Send Fics To Authors Because Everybody Understood How This Works And We Didn’t Want To Put Them In An Awkward Position — Like Forcing Them to Say Something on Twitter.” And the letter F.

Back in the nascent online fandom days, we couldn’t have conceived of social media and its ability to bring us into such close proximity with our favorite creators. You could not, say, put your fanart on Twitter and hope to see it retweeted by the directors of Avengers: Endgame. While some of this accessibility is great, I think it has also emboldened a generation of Internet denizens to the idea that these creators are available to them 24/7, and that they have the responsibility or inclination to engage with fanworks. As Jemisin lays out, even if the original creators were so inclined, legally they really cannot engage in this fashion. We need to stop putting them in such an awkward position and remember that social contract.

An element I adored about Jemisin’s thread is that she also takes the time to explain why she still creates and consumes fanworks in other fandoms herself. This may be one of the most illuminating ways I’ve seen to impart the joys of fic to those who may have never partaken.

There’s no particular stigma, or at least not anything worse than what genre writers deal with anyway. It’s just a fun thing to do. More social than pro writing, no pressure, more freedom to experiment, immediate vs delayed gratification.

Fandom friends and enemies-to-lovers, let’s be glad that we live in a world where fanfiction is now almost universally embraced as a concept by creators, and wonderful projects like Archive of Our Own can win a Hugo. Please do not try and make the original creator read your work. Our sandboxes exist for a reason, even if they have changed shape over the years.