Mythic Quest: Raven's Banquet Is a Clever Comedy for Gamers | The Mary Sue

The It's Always Sunny in Philadelphia gang poke fun at big tech. 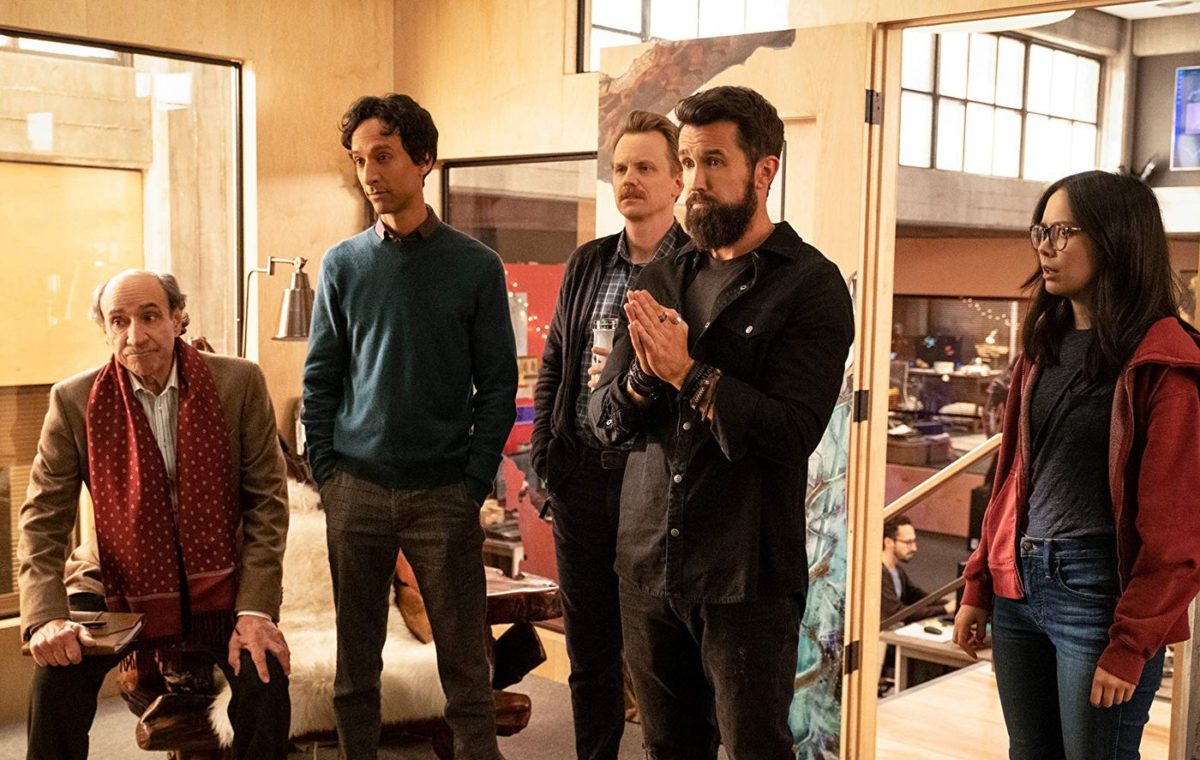 Given that our pop culture is positively saturated with nerd content, it’s surprising that there have been so few films and television series about gaming culture. Outside of the realm of science fiction, tech culture and video games have largely existed within their own realms. And when they do cross over, the result is often something like Adam Sandler’s misfire Pixels.

Leave it to tech giant Apple to give us one of the most accurate and hilarious depictions of tech bro culture and the video game industry via Mythic Quest: Raven’s Banquet. The series hails from Rob McElhenney, Charlie Day, and Megan Ganz (the creative minds of It’s Always Sunny in Philadelphia), and stars McElhenney as Ian Grimm, the egotistical yet insecure creator of Mythic Quest, a massively popular online RPG in the vein of World of Warcraft.

The pilot opens with the launch of Raven’s Banquet, the game’s first expansion, which struggles to meet its launch date thanks to Grimm’s capricious whims regarding the game’s details. Grimm’s enthusiasm is tempered by his anxious executive producer David (David Hornsby, aka Rickety Cricket of IASIP) and his hyper-competent and frustrated lead engineer Poppy (Charlotte Nicdao), both of whom struggle to rein in their visionary boss.

The core cast is rounded out by C.W. Longbottom (F. Murray Abraham), a washed up sci-fi author who provides the storyline for the game, and Brad (Danny Pudi) the mercenary money guy looking to squeeze every cent out of the players. In addition, there is David’s sociopathic assistant Jo (Jesse Ennis) and awkward queer game tester Rachel (Ashley Burch) and her crush, fellow tester Dana (Imani Hakim). Comedy favs Aparna Nancherla and Jake Johnson also appear in supporting roles.

Together, the cast delivers a solid workplace comedy fueled by the intense nerdery and relentless consumerism that drives the gaming industry. Like most comedies, it takes a few episodes for the series to find its footing, but once it does it’s off to the races. Mythic Quest gleefully dives into the idiosyncrasies of the tech industry, from the tween Twitch tastemakers to issues of exploited labor to online privacy.

The third episode tackles especially relevant issues when the team finds out that MQ is the number one game among nazis. David and Brad form a diverse ethics committee, but end up talking themselves in circles as they debate the profitability of banning nazis vs. free speech argument that even the biggest tech companies can’t seem the crack.

Mythic Quest will no doubt be compared to the last big tech sitcom, Silicon Valley, but spiritually, the series is closer to Community (where Ganz worked as a writer) and of course IASIP. And unlike Silicon Valley, MQ features several well-drawn and compelling female characters and a diverse cast.

Among the strong ensemble cast, the breakout is Nicdao, whose Poppy gives major “Liz Lemon in tech” vibes. Her sparring friendship with McElhenney’s Grimm is a refreshing take on male/female dynamics in the workplace that sidesteps romance and flirting for a genuinely collaborative friendship.

Whether you’re a hardcore gamer or a noob, you’ll find plenty to enjoy in Mythic Quest: Raven’s Banquet, which is quickly establishing itself as one of Apple TV+’s strongest original series.