NASA Has Cracked The Mars-Rock Case

The alien butler did it. 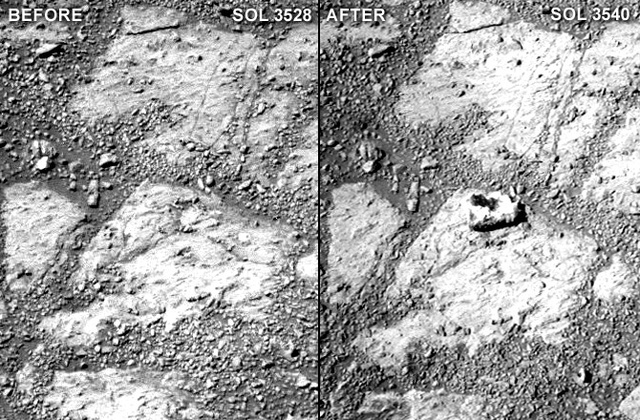 Well, folks, that’s all she wrote. After weeks of  speculation over the mysterious jelly doughnut rock that appeared in front of the Mars Opportunity rover–prompting speculation and even a lawsuit–the Space Squad at NASA say they finally have an explanation for the rock’s origins. Spoiler alert: not aliens.

We first wrote about the rock back in January, when it gained media attention at an event celebrating the ten-year anniversary of our rovers exploring Mars.

Our Man Space Detective Steve Squyres described the rock’s bizarre appearance as an example of how Mars “keeps throwing new things at us,” and because he is a space cop and cops love doughnuts, he referred to the discovery as “jelly doughnut like”, a name that’s become more recognizable than the rock’s actual NASA title, “Pinnacle Island.”

Conspiracy theorists and alien enthusiasts immediately used the doughnut as evidence of martian involvement, especially after NASA’s announcement that Pinnacle Island has a composition never before seen on Mars, with unprecedentedly high levels of manganese, sulfur, and magnesium.

NASA’s level-headed reporting on the Mars mystery even spawned a lawsuit, in which 9/11 conspiracy theorist Rhawn Joseph sued the government agency for “not bothering to conduct a close-up investigation” and verify his belief that the rock was, in fact, a form of lichen that grows on Earth.

Alas for Rhawn and his fellow trigger-happy believers, Squyres and co have finally cracked the case. Squyres gave Discovery News his official explanation for the rock’s origin, saying:

Researchers have determined the now-infamous Martian rock resembling a jelly doughnut, dubbed Pinnacle Island, is a piece of a larger rock broken and moved by the wheel of NASA’s Mars Exploration Rover Opportunity in early January.

Only about 1.5 inches wide (4 centimeters), the white-rimmed, red-centered rock caused a stir last month when it appeared in an image the rover took Jan. 8 at a location where it was not present four days earlier.

Confirms Opportunity Deputy Principal Investigator Ray Arvidson, Space P.I. Extraordinaire,  “once we moved Opportunity a short distance, after inspecting Pinnacle Island, we could see directly uphill an overturned rock that has the same unusual appearance. We drove over it. We can see the track. That’s where Pinnacle Island came from.” Here’s a picture of Opportunity’s tracks running over the rest of the doughnut. 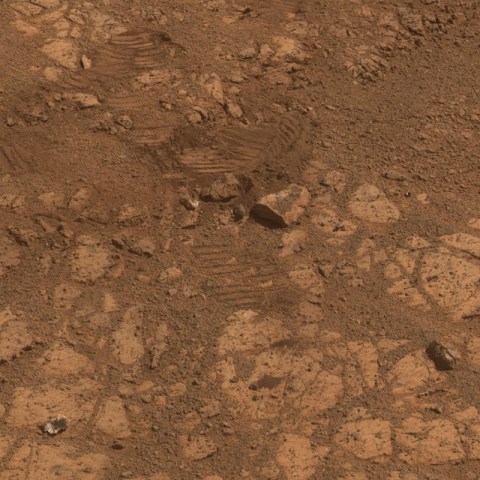 Way to go, Space Detectives. Obviously no explanation other than “yup it’s an alien, Obama is a robot and Roswell was a thing” will satisfy hard-core conspiracy theorists, but the picture above is fairly convincing.

We imagine our grizzled Space Detective team can now retire, try to eat better and quit smoking, and spend their remaining days outrunning the demons of their Space Law and Space Order past. Hey, we have to make non-alien filled space interesting somehow, right?

(via Gizmodo, images via NASA)