But they also say that we're all aliens, so I don't know what to believe. 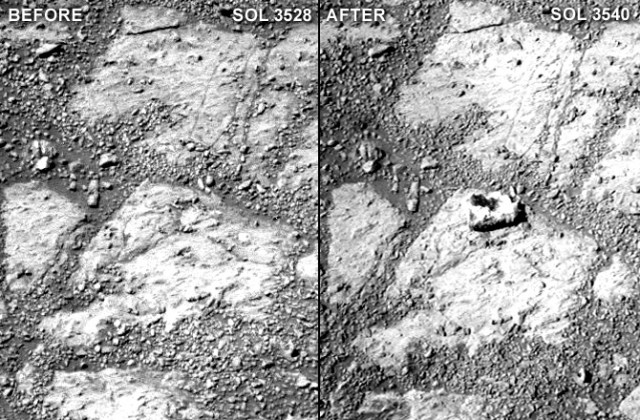 Stop the presses! There’s a new development in the ongoing investigation into the mystery  rock on Mars! Scientists now say that the rock, which they’re calling Pinnacle Island, has a baffling chemical composition unlike anything they’ve ever seen on the Red Planet before. But still nothing about aliens. I mean, nothing much.

The development was announced by NASA Scientist Dr. Steve Squyres at a symposium celebrating the Opportunity rover’s tenth anniversary, and at the time, I was underwhelmed that all Opportunity had for us was a rock  from a planet that looks to me like one big rock (next thing we know, Squyres will be telling us the Earth is round.)

But it may be time for me to eat my delicious Mars-doughnut words, as the little rock’s fifteen minutes of fame don’t seem to be ending any time soon.

In breaking news from the Space Investigation Squad (not a real thing, but it obviously should be, it would kill on Starz,) scientists are now saying that Pinnacle Island has far more magnesium, sulfur, and manganese than any rock they’ve studied before on Mars.

In fact, Pinnacle Island has twice the level of manganese of anything previously analyzed on the planet.

Says Squyres, “Mars just keeps throwing new stuff at us.” And no, alien abductees and UFO enthusiasts, he does not mean literally.

However, a press release last Thursday by the Foundation For Applied Molecular Evolution last Thursday is forcing me to cut earthlings some slack for their insistence on the existence of Martians. The Foundation hypothesizes that life in the universe originated on Mars and arrived on Earth via a meteorite.

Says chemist Steven Benners, “The evidence seems to be building that we are actually all Martians; that life started on Mars and came back to Earth on a rock.”

So, science is telling me that we’re all martians, there may be more martians on Mars, and a jelly doughnut with an unprecedented chemical composition suddenly appeared in front of our rover. As much as I dislike sensationalizing the Pinnacle Island story, I think it’s understandable for us all to get excited now. Mars has more in store for us yet. Even if it’s just more weird rocks.

(via RT, image via NASA)