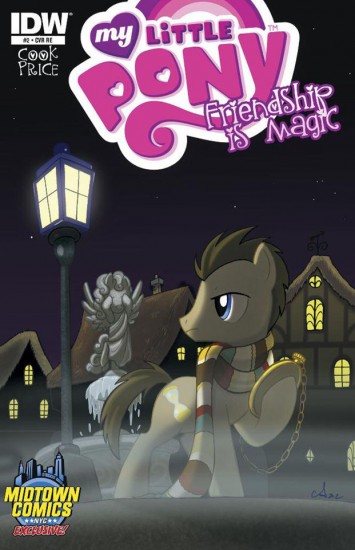 We thought it was pretty cool news when IDW Publishing announced they were doing a My Little Pony: Friendship is Magic comic book from Katie Cook and Andy Price. We thought it was very cool when the first issue had over 90,000 pre-orders. What comes after very? That’s the word I need right now. Midtown Comics in New York has an exclusive variant cover for issue two from Amy Mebberson (of Pocket Princess fame) featuring Time Turner, the in continuity Doctor Who pony. And he’s wearing a Tom Baker scarf! And a Weeping Pony Angel!! This is too much to handle! You can put in an advanced order for it (while supplies last!) on Midtown Comics’ website.