My Hero Academia Has Its Own “Hey Auntie” Moment

Oh so THAT’S why it was trending.

**SPOILERS for the My Hero Academia manga as a whole.**

If you use your Twitter to follow fandom like I do, you know that last week was a LOT. While Supernatural was on fire as it aired, My Hero Academia was, too, thanks to spoilers for its recent manga chapter (290). The actual release wouldn’t hit until Sunday, and when it did? CHIIIIILE!!!

As the heroes continue to attempt to defeat Shigaraki, the League of Villains shows up on their extremely noble, incredibly terrifying steed, Gigantomachia. Before Endeavor can even attempt to come up with a battle plan, Dabi takes center stage and spills the hottest of teas, just, like … absolutely scalding. He’s Endeavor’s eldest son, Toya Todoroki, but it’s not just Endeavor, Shoto, and anyone on the battlegrounds that hears it. Dabi made a prerecorded video to air during the big fight that’ll surely be trending soon.

The video goes into great detail about Endeavor’s abuse, something that the number one hero has been trying to atone for. We don’t see it as extensively as we did with Shoto back when he talked to Deku at the sports festival, but the hunched over image of a young Toya (mirroring a young Shoto) is enough to know the extent of Endeavor’s cruelty.

Why is it a big deal in the fandom?

The Dabi Theory has been circulating through the My Hero Academia fandom for years. I’m not sure who started the theory, but I do know it stemmed from a very brief interaction between Dabi and Shoto back when the League of Villains kidnapped Bakugou. Something about the way Dabi spoke to Shoto felt too … personal. 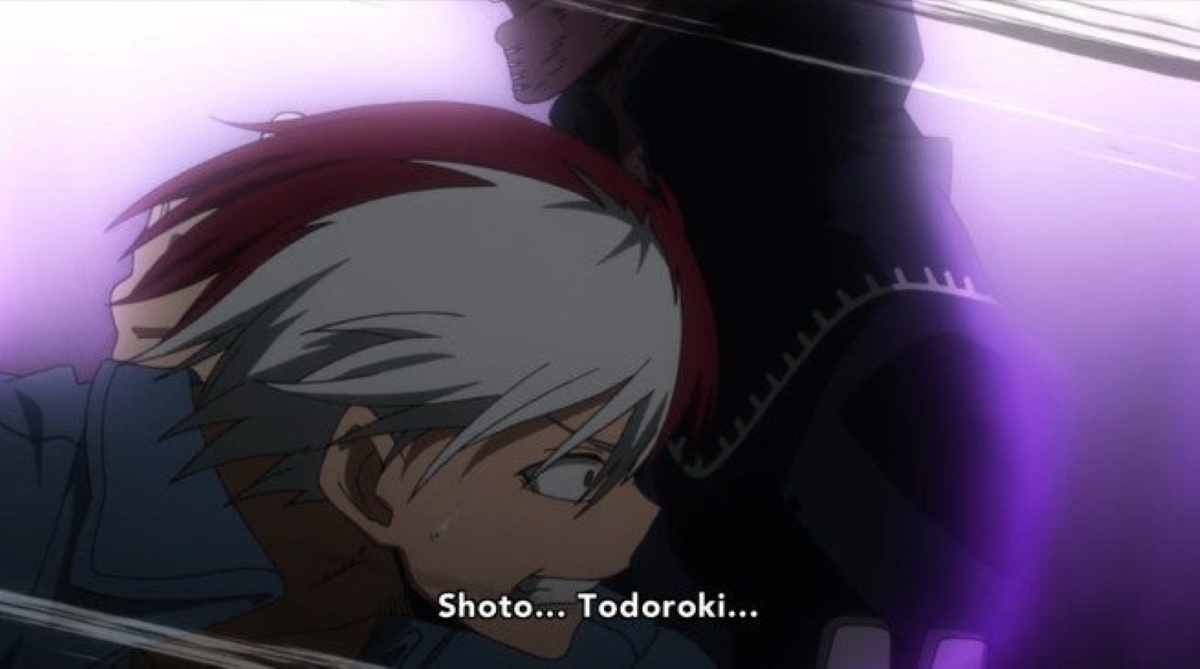 One brief exchange was all it took.

Then, fans began piecing together his blue fire, his burn scars, and the way he addressed Endeavor when they spoke after the High End Nomu battle (which anime-only fans will probably see in the upcoming season 5). Out of all the villains, Horikoshi has been taking his time in revealing Dabi’s backstory. There was an entire villain arc where we learned the motivations from the likes of Himiko, Shigaraki … hell, we even learned that the doctor who told Deku he was quirkless was in with the villains this entire time!

But nothing on Dabi.

Why is it a big deal in the story?

It’s no secret that Endeavor has been trying to do better. Fans have been divided on whether or not he deserves forgiveness, but what’s interesting to me about Endeavor is that he’s not doing it to be forgiven. I’ve seen stories—and have met people, to be honest—who hurt someone, apologize, but never even attempt to do the most important step: take action so that they grow as people whether they’re forgiven or not. Endeavor’s trying to improve because, well, he should, but more importantly, whether his family forgives him doesn’t matter in regards to his story. That’s something for them to decide, which he blatantly states to his son, Natsuo.

The Todoroki storyline is impactful, to me, because it’s not a unified reaction to Endeavor (much like the fandom itself). Natsuo hates him. Fuyumi is trying to make peace. Shoto’s feelings fluctuate between “screw him” and “please don’t die.” It’s a realistic portrayal of how people deal with abuse. The feelings will vary, and Endeavor knows that if he’s actually going to make good on his word, he has to let his family feel however they want. He can’t be out here like “I’m TRYING” as though that entitles him to anything, which is something a lot of folks in the wrong do.

You’re supposed to try anyway, even if the ones you hurt never forgive you.

And Dabi? PHEW! Certainly does NOT forgive him. 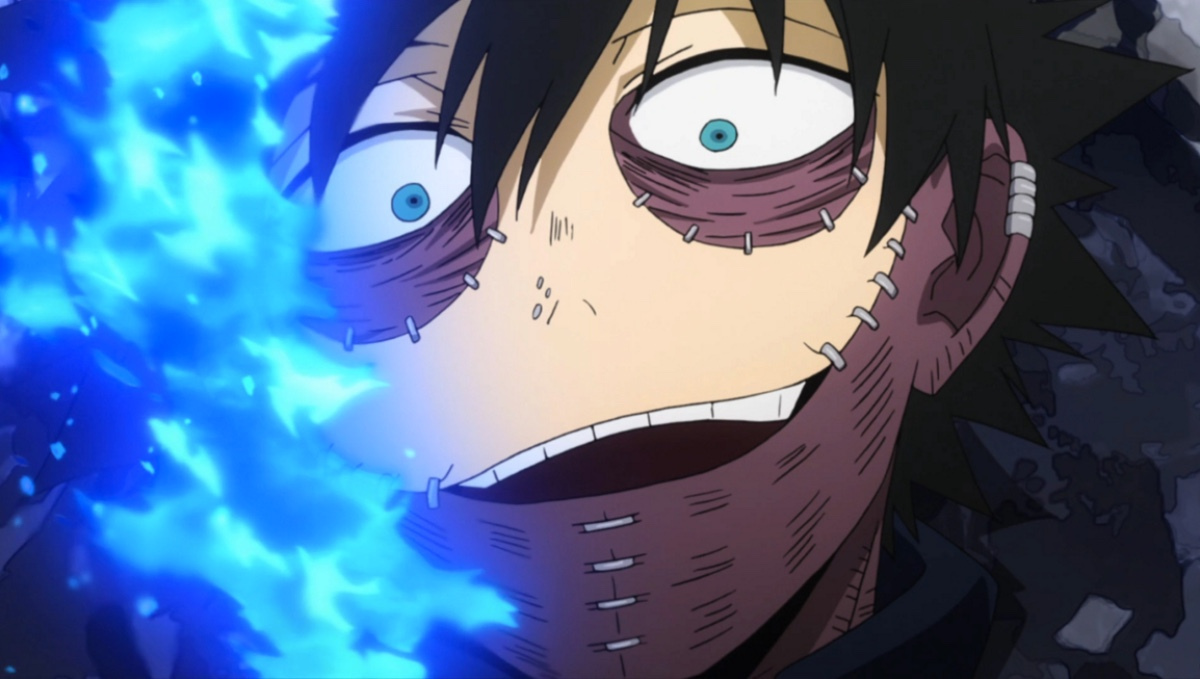 I truly appreciate Dabi being the one who airs out Endeavor’s dirty laundry. As much as Endeavor’s trying to make progress, had he been the one to reveal this truth, there’d be too much of a chance of people sympathizing with him/patting him on the back for admitting to it (or, let’s be real, too much of a chance for the Hero Public Safety Commission to spin it).

We’ve seen it plenty of times with those Notepad tweets of people admitting problematic behavior. Suddenly, their harsh actions are overlooked because people are gassing them up for “being brave enough to come out and say it.” Insert your toxic celebrity of choice who still gets work even if they’re the worst, but hey, they posted a “crying on camera” vid, so … *shoulder shrug.*

Honestly? Endeavor’s harm toward Dabi was not Endeavor’s story to tell. The victims should always be the ones we hear from when they’re ready, and holy shit was Dabi READY. And it wasn’t like he just told Endeavor to his face. No, this dude washed the color out of his hair and let his father know that he was HAPPY for his number one status JUST SO HE COULD DESTROY HIS LIFE. Then, he DANCED.

Dabi showed up and said,

Endeavor hasn’t earned a single thing since we’ve met him, and really, that’s exactly what he deserves. Number one spot? By default. Relationship with his family? Fractured because of his selfishness to get to a spot that he, again, won by default. Does Endeavor deserve a redemption arc? I’d argue that’s not what this is. It’s more of an “accountability” arc, and I hope it continues in that direction.

Endeavor gets the number one spot … by default.

I keep saying that someone is going to die. (On the hero side. We already lost a villain.) On the one hand, I think it might be Endeavor, leading to an extremely conflicted Shoto, who miiiiight stray from the hero path. (He was already angry about them getting reprimanded for the Hero Killer, Stain. Imagine being told to chill after your father is killed by your estranged brother.) Now, when I say “stray,” I don’t mean full-on villain—perhaps a vigilante, or something along those lines. I honestly don’t see Shoto coming out of this with a “hero society is right” point of view.

He’s about to scream ALL OF YOU WERE WRONG to the ancestors.

On the other hand, I don’t want Endeavor to die because he has so much he needs to own up to. Like … there’s a shrine to Toya at their house, but Toya clearly isn’t dead. Why the shrine, Endeavor? Did you think he was dead, or is that the lie you told yourself?

Really, this entire arc is a giant red flag of HERO SOCIETY NEEDS TO CHANGE! We know, at this point, that many of the villains in the league were pushed to that point through other people’s assumptions of them. Of course, society doesn’t see it like that, and we’ve seen many examples of the way people are judged based purely on their quirk (or lack thereof). But maybe if society sees their number one in this kind of light, they’ll start to get it. After all, his actions created a villain who’s part of an immensely destructive group.

It’s time for the heroes to start questioning things, and I imagine that the younger ones are going to do just that.