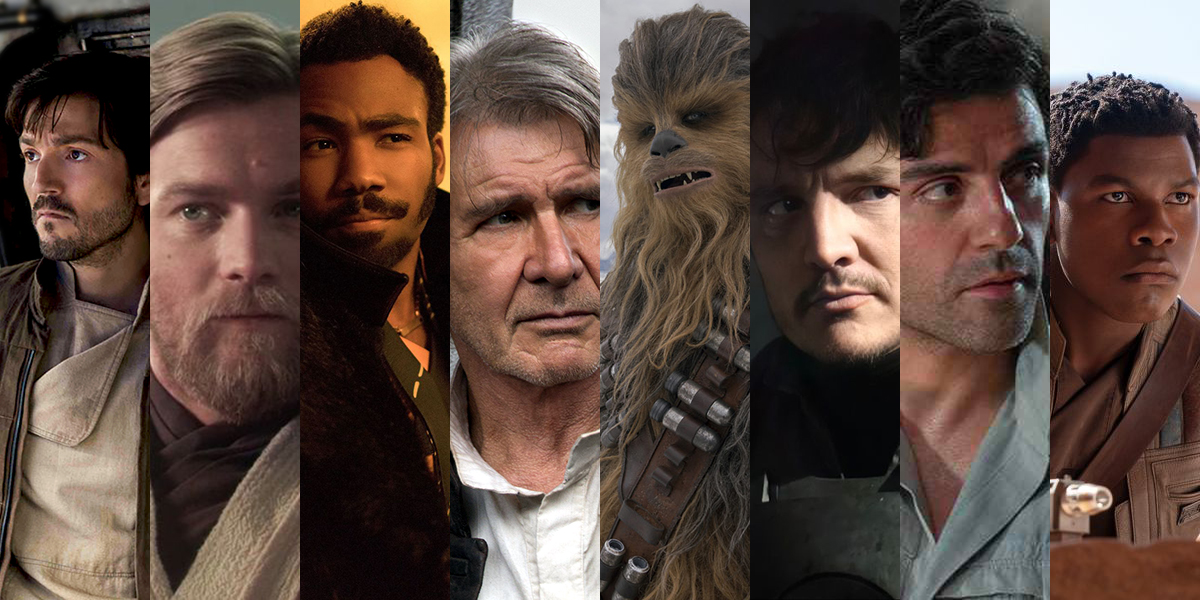 I am but a simple woman of simple taste. When it comes to Star Wars, I tend to love my himbo boys, the strong boys with the heart of gold, or the sneaks. Those are my faves and those are who I would die to protect. It’s always been this way. I’ve loved Chewbacca for as long as I can remember, and he’s just a big strong boy who would do anything for his best friend. And this love has only grown and extended to a plethora of Star Wars boys.

So today, the day we celebrate the series we love so much, I’m going to explore the boys who make me swoon and have captured my heart because why not?

When I tell you I love Din Djarin, I hope you know I’m not joking. If I could marry a fictional character, he’d be high up on the request list. The himbo king of Mandalore himself, Din is just a boy who may not make the smartest move, but he will do what it takes to protect you and those he cares about. He’s great, he’s beautiful, and he tried to do a face scan with a helmet on. To quote the Little Mermaid herself: Daddy, I love him.

My love of Chewbacca is unconditional—just the kind of love that extends past this franchise and into the overall love I have for things outside of where they started. Chewbacca is the kind of character who dedicates himself to those he cares about. And I don’t mean that figuratively. That’s what he does. His life debt with Han Solo went from something he did because he is a Wookiee and turned into a friendship and a relationship that defined them both, and I just can’t ever really put into words how much I love Chewie. (Please note when I thought he died in Rise of Skywalker, J.J. Abrams was actually about to get a strongly worded email.)

Finn, for me, falls into the category of those strong boys with a heart of gold. The entire sequel trilogy deserved more Finn, but what we got showed me just how dedicated he was to fight for what he believed in. He broke free of the First Order and was most definitely Force-sensitive (do not even get me started) and definitely should have loved Poe (again, don’t get me started). But more than that, he was someone you could rely on. Rey knew Finn had her back. Poe barely knew him and still trusted him because Finn was just the kind of guy you knew would be there for you know matter what, and it’s why he is one of the best and deserved so much more than he got.

Oh Han, oh you sweet himbo. One of the reasons I love Han is because he will find a way to get out of a situation no matter what. It might just not be the smartest way to get out of the situation. He’s the kind of guy who will run out of ammo and decide to just chuck the thing as a weapon against someone (it’s why when Din did the same thing on The Mandalorian, I screeched). Han Solo under pressure basically gives away that he’s a spy and he rarely does the right thing for the right reason the first time around. But we love him because, at the end of the day, he means well and he’s cute and also one of the best damn pilots out there.

Cassian Andor has his own show coming up, and when I tell you this is something I willed into existence, know that I am right. I loved him so much in Rogue One and wanted to know so much more about him. He was the kind of Rebel who got his hands dirty. He’d kill, he’d lie, he’d cheat, and he’d sneak his way into getting information to bring down the Empire, and while it didn’t make him perfect, it made him good at what he did. He was determined to help the Rebel Alliance, and I just want to know so much more about him. I give the gods my thanks for Andor.

Poe Dameron is in love with everyone and you cannot tell me otherwise. Just constantly in awe of strong women and Finn and defeating Kylo Ren and Finn and running towards BB-8 and … did I say Finn? Poe Dameron was supposed to die in The Force Awakens, and my god am I glad that he did not. Just a beautiful space spice runner who I want to protect with my life (who again, is in love with Finn). Poe Dameron was one of the most interesting new characters to me, and I still want to know more about him—especially his relationship with Leia.

Do I really have to explain Lando? Like … really? I pose this question: WHO DOESN’T LIKE LANDO? (I don’t trust those people.) Lando and Han were frenemeies, meaning Han took the Falcon from Lando, Lando sort of screwed Han over, but they still cared about each other and tried to help one another, and the more I learn about Lando Calrissian the more I just want to fall in love with the man in the beautiful capes.

Look. I was a young girl during the prequels. Why yes, I was in love with Hayden Christensen during Revenge of the Sith. That didn’t mean I was blind to Ewan McGregor throughout all three of those movies. I wanted more of Obi-Wan Kenobi for the first time in my life. During the original trilogy, he was fine. I thought he served his purpose and that was cool. And then in walked McGregor and my life and what I thought I knew got thrown out the window. Getting to see him in Obi-Wan Kenobi is truly going to make me feel like a kid again, and I’m okay with that. I’ll do anything for Old Ben Kenobi.

I have many loves in the world of Star Wars—many boys who I love to learn about and watch—but these are my favorites and I will happily stan them for as long as we both shall live.