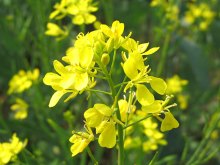 In a new study published in FASEB Journal, scientists have found that when rats were orally given a specific plant steroid, homobrassinolide, found in mustard plants, the steroid worked similarly to the response anabolic steroids produces — except with minimal side effects. The scientists found that the effect homobrassinolide has on protein synthesis in muscle cells led to every bodybuilder’s dream: Increases in muscle mass, lean body mass, and physical performance.

Slavko Komarnytsky, a researcher involved in the work, hopes, “that one day brassinosteroids may provide an effective, natural, and safe alternative for age- and disease-associated muscle loss, or be used to improve endurance and physical performance.”

For all those people that have weight-gaining or muscle-growth issues, or for those that would absolutely take steroids if not for the awful side effects, there just may be a future miracle drug for you.

Komarnytsky and colleagues exposed rat skeletal muscle cells to various amounts of homobrassinolide, then measured the protein synthesis in each structure — not exactly a large amount of steps. Along with the discovered increased protein synthesis, the scientists also found decreased protein degradation. The team then gave the rats the homobrassinolide for 24 days via oral intake, and measured the changes in body weight and composition, and food consumption.  Using dual-emission X-ray absorptiometry analysis, the team found an increase in lean body mass in the rats who were administered the oral steroid over the rats who did not take the steroid.

Editor-in-chief of the FASEB Journal best summed up the reason behind this experiment, but pointed out the less vain motives as well:

“The temptation is to see this discovery as another quick fix to help you go from fat to fit, and to a very small degree, this may be true. In reality, however, this study identifies an important drug target for a wide range of conditions that cause muscle wasting.”

A drug that has the same positive effects as anabolic steroids, without all the negative ones? Seems like that could make a pretty penny, as well as pretty people.