Here’s Our First Look at the New Muppets Movie, its Cast, and Synopsis

Entertainment Weekly has an exclusive photo of the Muppets on a whirlwind tour of Europe set to comprise the initial plot of what is being called The Muppets…Again!, a title full of all the punctuation that Star Trek Into Darkness is missing. Seriously. That’s a dumb title, The Muppets…Again! I don’t care how good you generally are are at self-referential 4th wall breaking. See? Nobody can even tell that that was two sentences. I’m not putting a non-italicized period just after an italicized exclamation point. That’s just gross.

But I forgive you, because you’ve confirmed that Tina Fey is your female lead.

Yes, The Muppets…Again! concerns fuzzy antics across Europe, as Kermit and Co. complete and international tour and he is mistaken for a jewel thief. From Disney’s press release:

Disney’s “The Muppets …Again!” takes the entire Muppets gang on a global tour, selling out grand theaters in some of Europe’s most exciting destinations, including Berlin, Madrid and London. But mayhem follows the Muppets overseas, as they find themselves unwittingly entangled in an international crime caper headed by Constantine—the World’s Number One Criminal and a dead ringer for Kermit—and his dastardly sidekick Dominic, aka Number Two, portrayed by Ricky Gervais, creator of “Derek” and the Golden Globe®- and Emmy®-winning series “The Office” and “Extras.” The film stars Golden Globe-, Emmy- and SAG Award®-winning actress and writer Tina Fey (“30 Rock,”
“Mean Girls,” “Date Night”) as Nadya, a feisty prison guard, and Emmy Award winner Ty Burrell (TV’s “Modern Family”) as Interpol agent Jean Pierre Napoleon.

Am I concerned at the superficial similarities to The Great Muppet Caper, since according to Entertainment Weekly, this mysterious (and presumably quite handsome) Constantine is after “an enormous diamond?” Kinda, yeah, seems like they really should have gone with art theft or bank robbery or something, you know, not comparable to the Baseball Diamond, and here’s another jewel thief who Piggy might very well have a romantic dalliance with if he’s a dead ringer for Kermit. But I am an insufferable Muppet nerd, and will give them the benefit of the doubt wherever possible.

And hey, Tina Fey is the female lead. We heard this from the Hollywood Reporter’s sources three weeks ago, and Fey confirmed her involvement at the SAG awards this week, but it seemed too good to be true. Just being involved in the shoot might not mean anything: there are usually a lot of cameos in Muppet movies. But now we’ve heard it from Disney themselves. Time to sit back and wait for that release date… for a bit more than a year. The Muppets…Again! premieres in March, 2014. 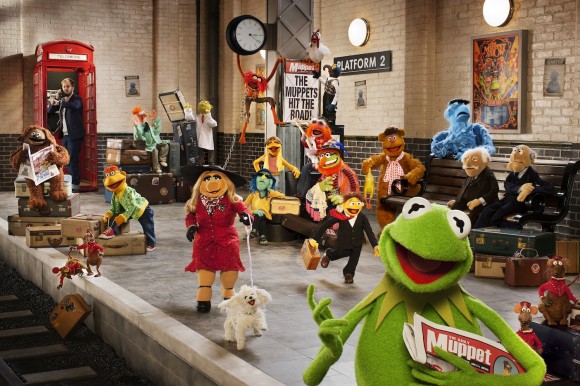