Muppets Most Wanted Review: “The Sequel’s Never Quite As Good” 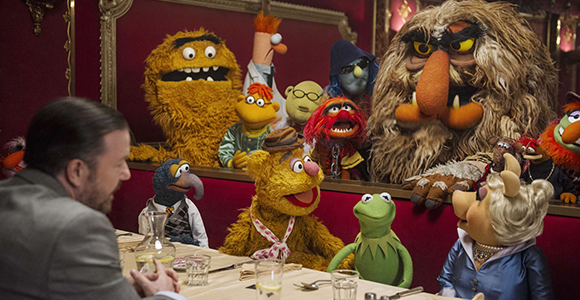 So it was said in Muppets Most Wanted‘s opening number—an abbreviated version of which you can find online—and so it is. But is a mediocre Muppet movie better or worse than a generic YA dystopia? My stance on seeing Divergent is pretty much “over my dead body,” so I can’t claim that Muppets Most Wanted is better and know for sure that my opinion is the same as it would be if I’d seen both movies.

But Muppets Most Wanted is probably better.

Does Divergent has a puppet frog dancing on someone’s head? I think not!

Muppets Most Wanted kicks off with a metatastic opening number that starts right after The Muppets’ closing credits and ends with Kermit & co. deciding to go on a world tour. From there what happens is pretty much what you’ve seen in the trailers: Ricky Gervais befriends and tricks the Muppets. Kermit is sent to a gulag run by Tina Fey, while his doppelgänger Constantine, “the most dangerous frog in the world,” takes his place. Ty Burrell‘s INTERPOL agent, together with Sam the Eagle, tries to figure out what the heck is going on. There are cameos. So many cameos.

It’s a prime setup for Muppetesque shenanigans in the vein of The Great Muppet Caper, and Muppetesque shenanigans we get. Burrell’s scenes with Sam the Eagle are hilarious. There are multiple cameos that are basically just puns on the actors’ names, and regular readers will know how I feel about puns. Alongside the more kid-targeted jokes we get some stuff for the adult crowd, too—hello, The Seventh Seal reference. And children, I’m sorry that you don’t probably don’t get why the Céline Dion cameo is as funny as it is. But there’s some Ross Lynch in there for you, whatever the hell a Ross Lynch is.

Basically, Muppets Most Wanted is everything that you’d expect from a Muppet movie… and nothing more. Its biggest flaw is that it’s missing the emotional core that made The Muppets great instead of just very good. I am in no way ashamed to admit that the scene in The Muppets where all their former fans gather outside the building makes me cry like someone watching The Iron Giant for the first (or second, or third… or any) time. The theme of friendship overcoming obstacles just worked so much better when the movie itself had to overcome the obstacle of there not having been a theatrical Muppet release in 12 years. Jason Segel, not in Muppets Most Wanted, didn’t just star in The Muppets: He co-wrote it as well. Everything gelled. The Muppets felt like a labor of love. Muppets Most Wanted felt like a labor of “Well, the first movie did so well, I guess we’ve gotta make a second one.”

But it’s hard to blame Muppets Most Wanted for having to follow up such an excellent film. It’s still a good, fun romp. And sure, maybe the sheer number of cameos was a bit distracting at times; as much as they’re an integral part of what makes a Muppet movie a Muppet movie, and as much as keeping my eyes peeled for the next recognizable actor was a fun game, 25+ may have been pushing it a little.

(Some of them were really good, though. I’m guessing a fair number of you were looking forward to the Tom Hiddleston cameo, but there’s one involving a solitary confinement cell… no, I won’t spoil it.)

Is this the best Muppet movie that ever has been or ever will be? No. Is it the worst? Not when Muppets from Space exists. But comfortably in the middle of Muppet canon is a pretty OK, Netflixable place to be.