You just know Grover likes to get his hands on some ice. 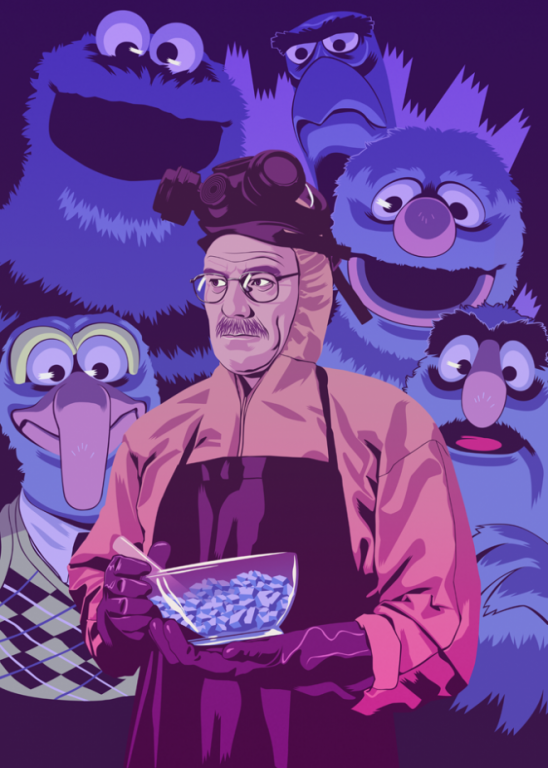 Chances are you’ve seen Mike Wrobel’s ’90s-style Game of Thrones illustrations around the internet lately, but that’s not all he’s up to. In honor of Breaking Bad’s final season, Wrobel’s graced us with a wicked new illustration of Walter White — as meth dealer to the Muppets.

A true fanboy at heart, Wrobel loves ’90s genre classics like The X-Files and Twin Peaks (one of us!), but also has a similar enthusiasm for those great paragons of pre-Y2K culture, The Fresh Prince of Bel-Air and Saved by the Bell. Wrobel spends 12 to 20 hours on each illustration, often staying up until three or four in the morning to finish them — an intense dedication of time and energy which most of us probably reserve for marathoning AMC shows.

In a recent e-mail to Wired, Wrobel said that his next projects will likely feature either From Dusk Till Dawn or True Blood, so prepare yourselves for some vampy goodness. Personally, I’m hoping for a Sookie-Bill/Buffy-Angel mash-up. Whatever, don’t judge me; you know that would bring the true ’90s realness.

Breaking Bad’s final season on AMC this Sunday night at 9pm EST. You can get prints of the above illustration, entitled “Some Kind of Blue Addiction,” on Wrobel’s Society6 page.