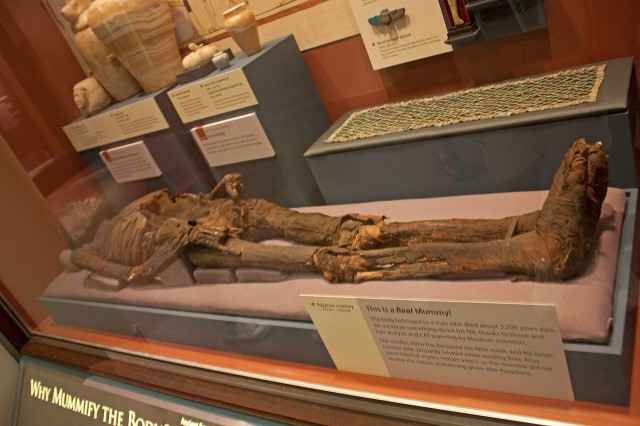 The childhood miracle we all wished for: finding something ancient and amazing (and maybe cursed) in the attic. One of the biggest nightmares of every parent: your child stumbling onto a dead body. Rarely do those two things intersect — but they sure did for Alexander Kettler, the boy who found a sarcophagus in his grandmother’s attic.

10-year-old Kettler was reportedly innocently playing amidst dusty old boxes in his grandmother’s home in Diepholz, Germany — as we’re all wont to do — when he stumbled onto a sarcophagus containing an authentic Egyptian mummy. Beside it were other containers holding an Egyptian death mask and a canopic jar. No one in the family had any recollection of seeing the artifacts before. Alexander’s father, Lutz Wolfgang, suspects they may have belonged to his father, who spent time some in North Africa during the 1950s.

While it is currently believed that the mask and jar are replicas, Lutz Wolfgang thinks the mummy may be real, and will be transporting it to Berlin for further tests. If it is real, Egyptian authorities will attempt to bring it back to Egypt, after seeing if it left the country by legal means or if it was stolen from a museum.

If it’s definitively proven that this isn’t some obscure and wide-ranging stunt to promote the upcoming Mummy remake, I will officially be more jealous of Alexander than I have ever previously been of a German 10-year-old who plays by himself in attics.