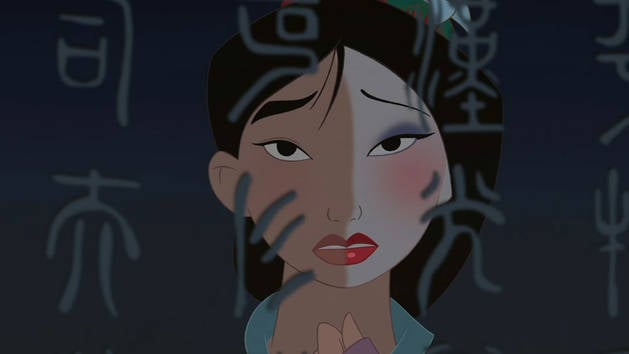 The great thing about art is that once it’s out in the world, it takes on as many meanings as there are people who enjoy it. For some in the trans community, Disney’s Mulan speaks to many of their experiences of gender simply because of the nature of the story it was telling. That’s awesome. What’s not awesome is trying to be an ally by using those personal experiences to spread misinformation more broadly.

A few days ago, someone created a meme from fan art by artist Robbie Cook. The meme was, shall we say, problematic:

As @vampkandy says, Mulan isn’t trans simply because she dons men’s clothes to sneak into the military. I’d go one step further and say that I disagree with the tweet above in calling her “a crossdresser.” Yes, she’s cross-dressing, obviously, but she doesn’t do it regularly, or even for herself because she enjoys it. She’s wearing a disguise to serve a specific purpose.

Whereas trans people may adopt a new gender expression when they are openly trans to be who they truly are, and cross-dressers regularly play with their gender expression to express a true side of themselves, Mulan was hiding herself in a costume in order to achieve a goal. So, you can see how equating an expression of one’s truth and identity to a costume can be seen as insulting, right?

Gender identity: who you are on the inside

Gender expression: how you show gender on the outside

What’s good about the meme is that it was clearly created by someone in response to the news that Donald Trump doesn’t believe transgender people should serve in the military. So, this is someone who was trying to be an ally and call Trump out on his ignorance. However, if you’re going to be an ally, you should probably do some homework about what being trans actually is and means before you start stating “facts” (or making jokes) on the internet.

What’s messed up is that the person who created the above meme wasn’t the only one who erroneously made the connection between trans men and Mulan:

All this talk about trans ppl being in the military, and all I can think is relating it to Mulan. #blessmulan pic.twitter.com/Xz0k1e36wJ

Trump’s banning trans people from serving in the military? What a fucking noodle. Hasn’t he seen Mulan?

This being the internet, there was, of course, no shortage of people to correct the misinformation. What bugs me about all this, though, is that some of the people doing the “correcting” were doing so for transphobic reasons, e.g. it’s insulting to be called a trans person:

Mulan was about a woman who wanted to fight in war. Not a fuckin crossdresser or transgender. Cut it out.

Grammar note: you can’t be “a transgender” any more than you can be “a small” or “a white.” Add “person” on the end of any of those, though, and you’re right on track. If nothing else, let correct grammar remind you that transgender people are people.

Meanwhile, Buzzfeed uncovered comments that sounded more like slurs on the Chinese social media site Weibo, in which people responding to the New Outlook post said things like, “This is the worst smear Ms. Mulan has ever received …” But “transgender” is not an insult! It is a gender identity, a category, a classification. That’s all. The only judgement in that word is the one placed there by whoever speaks it, and it’s clear that for far too many, calling someone “trans” is a “smear.”

One thing I will say, is that it’s interesting that so many assume that Mulan must be a trans man if she dons men’s clothes, because a cis woman would never do things like, you know, fight, or wear pants, or want to defend her family’s honor and her country with her life. Also, butch queer cis women don’t exist. Also, masculine straight cis women don’t exist. I mean right?

All of this said, this should not take away from how Mulan might resonate with a trans person if that’s what they get from the music and story. Fans having their own headcanon is awesome, fun, and empowering. Robby Cook, the artist who created the original artwork to which the text was later added, told Buzzfeed that people should interpret his art, as well as Mulan itself, in the way that gives them the most joy. He told Buzzfeed:

“If someone who is trans identifies with Mulan, I think that is great. My intention was not to highlight Mulan as a trans icon in that picture. I really like the duality of her, the soft geisha side, and the fierce fighter side. I personally do not think that she is a trans character. She was a girl, dressing up as a man to save her father. I appreciate the sentiment behind thinking she is trans. Being a gay man, I find I identify with some female characters.”

Individuals can take and celebrate whatever they like from Mulan, as they can from any other piece of pop culture. However, we should all be careful about how we phrase things when we put them out into the big, wide internet. A thoughtless, off-the-cuff comment can mean the difference between being an ally and inadvertently harming the very people you want to help.