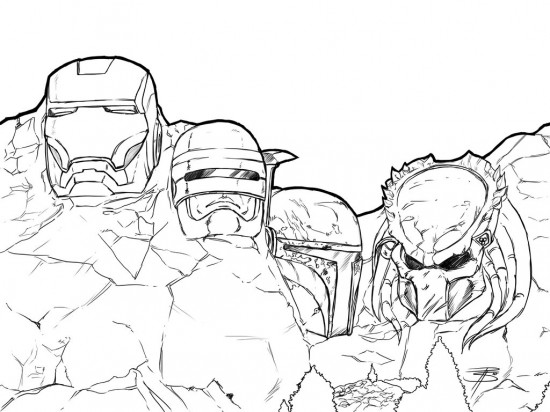 In his aptly titled work “Mt. BadA$$,” DeviantARTist Fooray reimagines Mt. Rushmore as a monument not to great U.S. presidents, but to pillars of sci-fi and geekdom, with Iron Man, RoboCop, Boba Fett, and the Predator taking the places of George Washington, Thomas Jefferson, Theodore Roosevelt, and Abraham Lincoln, respectively.

As Geekosystem’s own Kwame Opam notes, “the Predator = the Great Emancipator.” Also: The lack of Vader is striking (though explicable by the presence of Boba Fett; two Star Wars characters would be too much, and Fett is kinda cooler here), and RoboCop may be the weakest link, his storied career in Japanese commercials notwithstanding. Which may be the point: What fun is a sci-fi pantheon if it doesn’t inspire a little nerdrage?