While You Wait for the New Mystery Science Theater 3000, Netflix Is Beaming in the Classics

Watch out for snakes! 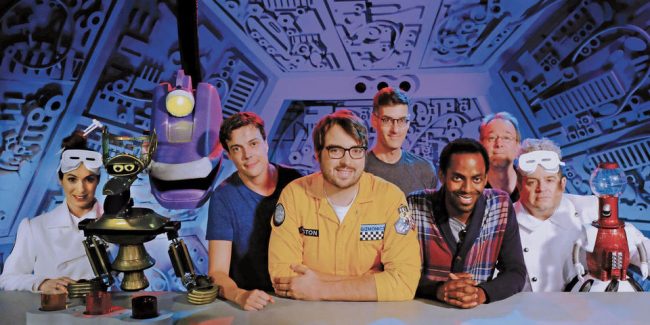 Beloved cult TV show Mystery Science Theater 3000 is set to be revived on Netflix April 14th. To prepare yourself, you can now return to the Satellite of Love and check out these fan-favorite episodes.

I have to quote Citypages because they nail the MST3K aesthetic in one go:

The list includes the iconic/shitteous Manos: The Hands of Fate. Other less notorious-yet-awesome flicks include Hercules Against the Moon Men, Santa Claus Conquers the Martians, and Jack Frost.

“Iconic/shitteous” pretty much encompasses the lasting appeal of MST3K. The show, which ran from 1988-1999 on a host of channels, was “about” a janitor in space who is forced to watch B movies by a duo of mad scientists, and snarks through the awful films with the help of his robot companions. In a way MST3K predicted our current “watch TV/breaking news and post commentary about it” media-reactive culture. It’ll be interesting to see how the concept can be updated for the present day.

In honor of the revival, Netflix is offering the chance to consume 20 MST3K fan-favorite episodes. Here’s the full list:

Kids these days have no idea how hard it once was to track down various MST3K episodes and what a dream the Netflix stream would have been in the times of old. The latest incarnation of MST3K stars Patton Oswalt and Felicia Day, with original creator Joel Hodgman acting as executive producer. You’re welcome.

Will you be binge-watching the new MST3K while yelling commentary at the screen?

(via Citypages, image via Netflix)