Kamala Khan As The New Spider-Man: Why Captain America 3 Should Feature Ms. Marvel 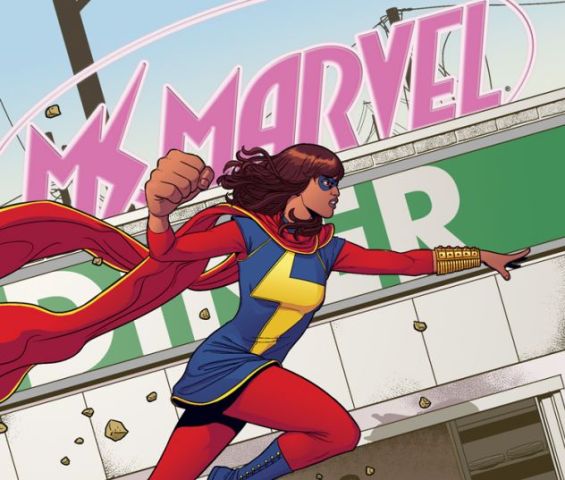 The following was originally posted on Wholly On The Level and has been edited and republished with permission.

What a tumultuous time to be a comic book nerd! With studios throwing superheroes at you nearly all year round now, it can be tough to keep track of who’s living in the same universe with whom. Not only do you need to know which characters are Marvel and which are DC, you also need to know which Marvel characters are Fox-Marvel, Sony-Marvel, or, well, Marvel-Marvel. In short:

Marvel: Everything else, pretty much.

Before 2008, you could have said that Marvel was pretty much, shall we say, f’d in the a. Fox and Sony only have three heroes licensed, but they are all-time biggies. Weird as it seems in retrospect, even Iron Man was a dopey second stringer in terms of mainstream recognition before Robert Downey Jr. made him a household name. So credit where credit’s due: Marvel Studios absolutely turned a frown into the craziest Joker-smile you could imagine over the last half decade or so. Critically as well as financially, nobody run this superhero game like Marvel Studios do.

This underdog status has been parlayed successfully by studio boss Kevin Feige into a reputation as “the studio that does it for the fans,” rather than the foul bean-counting sorcerers at WB who only care about their Acheronian paymasters! And whaddya know, the latest reveal from the Sony hacks seems to back that up: besides revealing that Hollywood power players have some scandalously bad e-mail etiquette, the released documents have also made public that Marvel Studios has, in fact, reached out to the license-holders of Spider-Man’s cinematic adventures for a cross-studio team-up.

Spider-Man would have appeared in Captain America: Civil War, an adaptation of the 2006 Marvel event miniseries in which a superhero-related tragedy causes public outrage and drives a wedge in Marvel’s super-community. On one side, there’s Tony Stark (Iron Man), who believes all superheroes should be registered and receive training; and on the other, there’s Captain America, who believes that this would go against the right to privacy and vigilantism afforded every citizen of the United States.

Caught in the middle of all this was the ever-down-on-his-luck Peter Parker, who took Tony’s offer of big bucks and a swanky penthouse and made his identity known to the public, saying he’d been Spider-Man since he was fifteen years old. In the Civil War storyline, Peter was the everyman caught between Tony and Steve’s ideological battle.

That’s been Peter Parker’s whole deal for half a century now. He tries his darnedest to please everyone in his life, but somehow always ends up with the shortest end of the stick. He’s the little guy who keeps his chin up, even though life throws every possible curvepumpkinbomb at him. Just trying to do right, you know?

It is exactly for this reason that Marvel Studios shouldn’t bother trying to get Spider-Man into their movies. The Marvel Cinematic Universe is probably the biggest thing in fandom right now. It’s what Lord of the Rings was ten years ago, on an even wider scale. It’s hip! It’s happenin’! It’s everything Peter Parker isn’t!

Back in the 1960s, delinquent teens may have been a hot button issue, but a J. Jonah Jameson complaining about Spider-Man in 2014 would just make him seem brain-damaged. In today’s world, is there not even the tiniest bit of cognitive dissonance that may occur in an audience when you present modern-day audiences with a main character who is a nerdily-handsome, physically powerful, white, straight, and male – and then tell them his life is really, really hard?

Now, of course it is possible for a handsome, physically powerful, white, straight male to have a really hard life. But superhero comic books (and their movie adaptations) aren’t really about nuance. They’re about big, broad, colorful characters and outsized emotions and actions. So what better way to truly illustrate the put-upon everyman than with Kamala Khan, aka Ms. Marvel?

Imagine a young muslim Pakistani girl cowering, maybe in an amateurishly self-crafted supersuit, on a poster for Civil War, in between Figures Of The Establishment RDJ and Chris Evans playing staredown. An image powerful enough that people might say hey, who is that girl and what’s her deal? Why is she making Cap and Tony fight?

Having a figure as iconic as Spider-Man in the middle would no doubt be even more evocative, but the point is simply that it wouldn’t be necessary. As stated before, Marvel Studios made these second stringers into billion dollar characters. Cap and Tony by themselves turn top-five-of-the-year grosses.

Some fans might say that Kamala has her own moments coming up in the Marvel slate – she’s a Captain Marvel fangirl and an Inhuman, and we’ll be seeing both Captain Marvel and Inhumans coming out in the next few years. But shit, man, what can I tell ya? We got an Ultron made by Tony Stark here, we got Scarlet Witch and Quicksilver who aren’t related to Magneto, we got a Nova Corps that doesn’t really resemble any Nova Corps on the page, we got a Miami Vice goon for a Mandarin, we got Janet Van Dyne dying off-screen if reports are to be believed… what I’m saying is, adaptations happen – and Kamala needs an introduction into the MCU sooner rather than later.

There are at least four Inhumans awakened in the MCU so far, why not make a little Blu-ray One-Shot showing Kamala getting her powers, and introduce her as a fait accompli in Civil War? Why not have her be a one-episode case that superpowered PI Jessica Jones encounters in her own 2015 Netflix series, or an 0-8-4 in Agents of SHIELD? You could have her be inspired by Captain Marvel even after superheroing for quite a while – how long did they call Green Arrow “the Hood” and the Flash “the Streak” on their respective CW shows?

Marvel Comics recently canceled one of their flagship titles, Fantastic Four. Rumor has it this was done to spite the upcoming Fox-produced adaptation. I’m not calling for something quite so dramatic, but it’s time Marvel realized they can say “Frankly? We don’t give a damn” when it comes to Spider-Man movies. They don’t need him any more. They have Kamala Khan.

Luca is a brain-damaged Daily Bugle editor who writes urban crime fantasy shorts with a transwoman protagonist, and whose pop culture musings can be followed at his blog Wholly On The Level.