Review: Daniel Radcliffe In What If 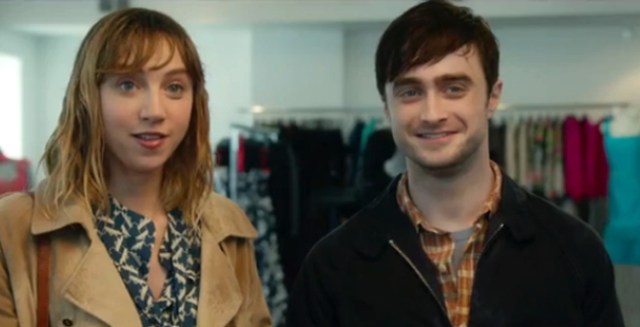 What If’s biggest draw is, let’s be honest, Daniel Radcliffe (just look at that face. What an adorable goober). I admittedly might not have been down for a rom-com if it didn’t star the boy who formerly lived, so let me say straight out of the gate that Radcliffe equips himself very well outside of non-period dramas and fantasy: Radcliffe’s Wallace, a med-school dropout cynical about love, is funny, complicated, grounded even in some of the movie’s more absurd scenes, and bodes very well for some of Radcliffe’s bigger upcoming projects (cough cough Horns).

The bigger gamble for me going into the movie was its premise–even though the titular question likely refers to the possibility of preserving a platonic relationship with someone or the hope that one’s crush will one day return your affection, in an age where straight-up love stories seem out of fashion, it’s applicable in other ways. What if it’s okay for a movie to just be sweet, even if it’s also implausible? What if watching pretty people do pretty things together can trump slight imperfection?

Helping me suspend my knee-jerk rom-com disbelief is Radcliffe and his chemistry with Zoe Kazan. Kazan plays Chandry, a graphic designer with a successful career and, unfortunately for Wallace, a foreign diplomat long-term boyfriend (played with nuanced grossness by Rafe Spall). I mention Chandry’s career because one of What If‘s most laudable aspects is the ambition and talent of its female characters. Chandry is just as career-oriented as she is interested in her boyfriend, Wallace’s ex-girlfriend–even though we see her only briefly–is still shown in the light of her career as a doctor, and the pair’s friend Nicole (played by Mackenzie Davis), although gainfully unemployed, is still more than just the token funny girl. The women in the movie trade even more one-liners and bro-ey jabs than Wallace and his asshole best friend Allan (Adam Driver), and the believability of their relationships is one of the movie’s biggest strengths.

However, I couldn’t suspend my disbelief for some of the movie’s plot points as easily as I could the characters’ bonds. What If was filmed in Toronto (which, full disclosure, might have influenced my love for it a little. Nothing like an obviously Canadian suburb to up my loyalty to a film), but whatever urban center it’s supposed to represent, everyone is running into everyone else all of the time. Wallace’s first visit with Chandry and her boyfriend ends in Failure to Launch-level physical damage, and I felt some of the movie’s broad comedic moments fell flat, at least compared to the natural humor found between the actors in more low-key scenes.

But if the question in the title can be applied at all to myself as a viewer (asking what could happen if I suspended all disbelief and cynicism) then I’d have to say that taking the movie as a whole, its slight flaws don’t matter. What matters is that I wanted Chandry and Wallace to fall in love, I wanted everyone to fall in love with the same uncomplicated affection. Isn’t that what we’re supposed to feel during romantic movies? This was the year where We Come Together mocked romantic comedy staples, where the Before trilogy ended on a bittersweet, compromised note–I don’t think self-respecting audiences are supposed to believe in soul mates anymore. What If made me want to.