Man Claims to Have Found Dead Mouse in Mountain Dew, Pepsi Argues Mouse Would Have Dissolved 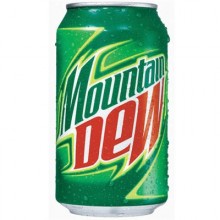 An Illinois man named Ronald Ball may have had one of the most uniquely bizarre and disgusting experiences one can ever have the misfortune to live through. Ronald Ball cracked open a can of Mountain Dew, took a long sip to quench his thirst, tasted something a little bit horrifying, spit out the soda and discovered a dead mouse. Yes. There was a dead mouse in his soda. At least, that’s what he says. He sent in the specimen to Pepsi Co. who he claims destroyed the carcass, and have now provided an insanely horrifying defense.

Pepsi Co.’s argument seems to be that there is no way that Ronald Ball could have found a dead mouse in his Mountain Dew because if a mouse did get into his Mountain Dew during production — the only time it would have a chance to do so — it would have been liquified by the time the soda got to Ball’s mouth. It would have been a “jelly-like substance” according to Pepsi Co.’s experts. Yes, that’s right, Pepsi Co.’s argument here is essentially “He can’t have found a mouse corpse in there because if there was one in there, it would have decayed beyond recognition as a mouse corpse before he could notice.”

Okay, so that’s pretty gross, but when you think about it, it might be a pretty reasonable defense. They aren’t saying the mouse would have been undetectable or anything, but they are tacitly admitting that Mountain Dew probably isn’t very good for your teeth. Gross as that is, it’s better to have to admit that your product is unhealthy and potentially caustic — something which we all know, really — rather than that it contained a dead animal, vermin no less.

The matter hasn’t been settled yet, but the next step should be coming soon. Ball found the mouse and filed suit way back in 2009, but on January 11th, Pepsi Co. will have to plead or prepare to go to trial, having delayed the legal action as long as possible. It’ll be interesting to see which unappealing option they chose. There isn’t much that isn’t disgusting about this case, but I think I speak for us all when I say that the worst thing, the very worst thing about all this is that I sort of want a Mountain Dew right now.

And because it didn’t fit anywhere else: “More like Mountain Ew.”

(The Madison County Record via Yahoo! News via Neatorama)