H&M is currently being dragged to filth on the internet for it’s racist and insensitive image in which a black boy wearing a sweater with the words “coolest monkey in the jungle.” Yup.

. @hm, have you lost your damned minds?!?!?! pic.twitter.com/EYuCXLZtv3

This is the kind of thing that lets you know that no people of color were around or consulted in the marketing of this product. There is nothing wrong with the shirt itself, but marketing it on a dark-skinned black boy is the just the worst possible choice they could have made.

H&M initially sent out an apology and a sucky one at that, but an attempt was made. “We sincerely apologize for offending people with this image of a printed hooded top,” H&M’s PR representative said, “The image has been removed from all online channels and the product will not be for sale in the United States.” Despite making this “apology,” the hoodie was still being sold on the U.K website, which only further added to the frustration. Additionally, they take no ownership of the problem of the image only that people were offended.

Yesterday H&M realized that their attempt at damage control had failed and sent out a longer apology to its media list: “Our position is simple and unequivocal—we have got this wrong and we are deeply sorry […]we clearly haven’t come far enough. We agree with all the criticism that this has generated—we have got this wrong and we agree that, even if unintentional, passive or casual racism needs to be eradicated wherever it exists.” 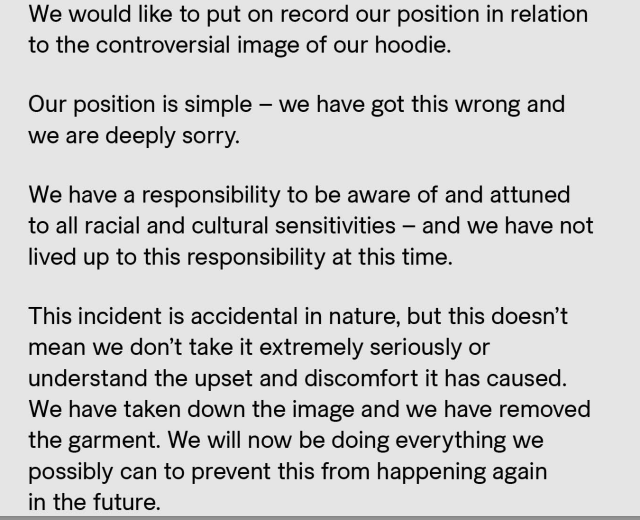 In addition to the dialogue surrounding the hoodie itself, the mother of the young boy in the photo took to Facebook with a message that  basically amounted to “get over it.” The Hollywood Reporter states that the mother and son are from Nairobi and now lives in Stockholm.

The mother of the little boy from the #h&m ad has spoken out, she said y’all need to stop crying wolf #terrymango

Now as the mother of this young boy, Ms. Mango has the right to decide what she feels about the issue, and no one has been trying to say anything negative about the young boy. In fact, there has actually been a lot of fan art celebrating the young boy and trying to change the text into something uplifting. As a mother, I’m sure she wants to protect her son and doesn’t want this to impact his career. However, claiming that people are “crying wolf” is dismissing the larger and more damaging issue.

Comparing black people to monkeys is something that has a long and painful history, regardless of anyone’s personal opinion. It is a shame that this young child is being brought into this conversation since he did not make this choice for himself, but serves as a reminder that companies, like H&M, need to make a bigger commitment to having diversity behind the scenes and not just with models. For a company that has such a long reach globally, H&M has a responsibility to make sure that it is being culturally sensitive and not creating images that bring up racist stereotypes should be PR 101.