mother! Is a Fascinating Film Better Understood If You Consider Jewishness 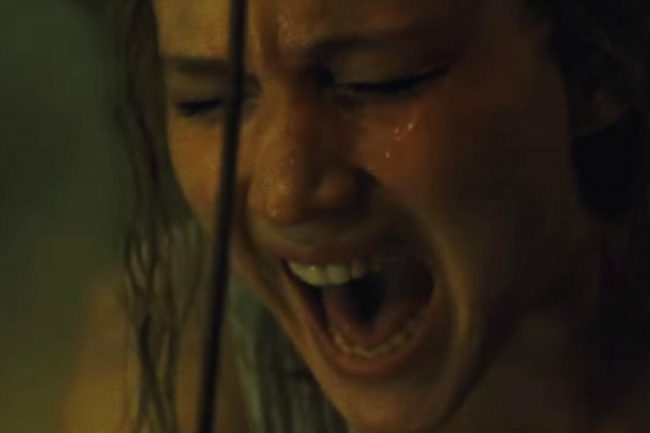 Apparently, Darren Aronofsky has said of his film mother! that it’s an allegory for his views on environmentalism. I know this, because after I saw the film, I looked it up. Looking back at the film after reading that, I can certainly see how that is the case, and the film works well that way. However, that’s not at all the first allegorical leap I made when watching it.

Fun, true-life fact about me: After about a year and a half of study and practice, I’m beginning the process of converting to Judaism. I’m doing this for several reasons, but the bottom line is that the Jewish way of interacting with God and the world makes sense to me and has, on some level, always made sense to me, even as I was being raised Catholic.

I bring this up, because I spent much of the past year taking an Intro to Judaism class, which gives its students a crash course in thousands of years of Jewish history and culture, so that history and culture, and those touchstones, are at the front of my brain these days as I prepare to become a card-carrying member of the tribe. My Jewish friends totally laugh, because right now, this Puerto Rican former Catholic is sometimes more knowledgeable about a lot of the nitty-gritty things that they haven’t given much thought to since Hebrew school.

This might explain why, as I watched the film with my Jewish wife, after seeing the plagues play out and immediately thinking of Passover as blood leaked from the guest room down into the basement and collected in the shape of a door frame, I was able to lean over and say, “Go with me on this: mother represents the Jewish People” and it was not something she’d considered. **SPOILERS GALORE AHEAD** 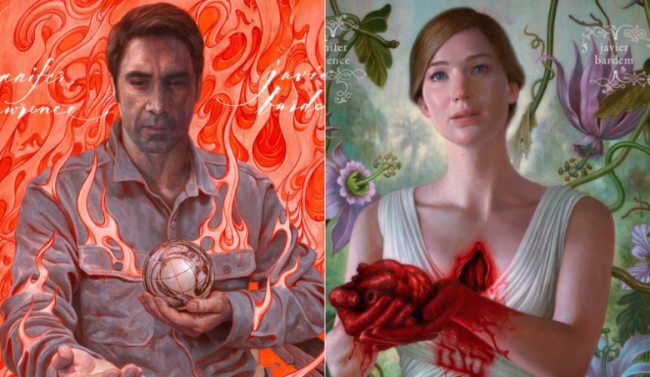 From the beginning of the film, you know that this isn’t a movie to be taken literally or linearly. The very first image is of Javier Bardem’s “Him” putting a large, glowing crystal into a stand, and standing back as the burnt house he stands in slowly transforms into a beautiful, idyllic home.

We then watch Jennifer Lawrence’s “mother”  rise from the ashes in a clean bed. We watch as she wanders the empty house, which is surrounded by grass and trees—no roads, no pavement of any kind—seemingly disconnected from everything else. It’s as if the house is the whole world. When Him returns, mother is thrilled. She clearly adores him.

Their idyll is spoiled by the arrival of Man (Ed Harris) and Woman (Michelle Pfeiffer), who seem to appear out of nowhere. Inexplicably, Him lets them stay in their house, much to mother’s disappointment. They end up being the worst houseguests ever: they wreck the place, are all over each other in hugely inappropriate ways, and then they do the one thing Him ordered them not to do.

They go into his office—the place where he creates—to touch the glowing crystal he’s specifically told them not to touch, and they end up breaking it. They are instantly ashamed, and he kicks them out, boarding up the office behind them. (‘Sup, Adam and Eve getting kicked out of the Garden)

Soon, there’s a reference to the Plagues (locusts, frogs, blood) and to Passover (blood over a doorway), and the arrival of Man and Woman’s dueling sons, one of whom kills the other out of jealousy (Cain and Abel, anyone?). Him then leaves mother alone as he and the family take the wounded son to the hospital.

When Him returns, mother is relieved. Now, it can just be the two of them again. That is, until Man and Woman return after their son’s funeral, this time with more people: family and friends.

Throughout the film up until that point, mother is increasingly ignored, despite the fact that she’s Him’s wife (his Chosen One). When the family returns to the house after the funeral, Woman is harsh toward mother, shooting her dirty looks, and telling her to put something decent on.

Despite mother’s pleas, these people will not leave her and Him alone. They begin being destructive. Meanwhile, Him inexplicably has no problem with this, saying that this is what they need to do. All while he insists that he loves her. 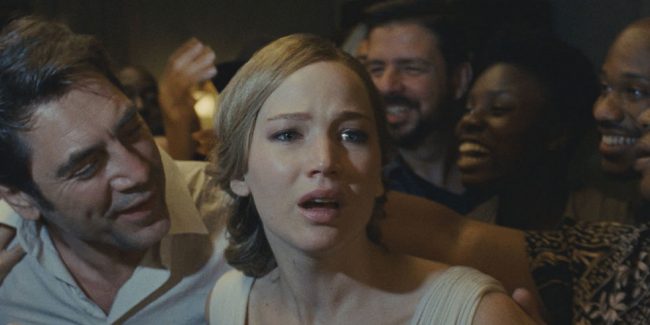 It was this dynamic between Him and mother, coupled with the Biblical references that first planted the seed for me that mother! is the story of God’s relationship to the Jews. Or, rather, of the Jewish People’s relationship to God. In Judaism, there’s a covenant, an agreement between God and Jews. If the Jews do X,Y, and Z, God will do X,Y, and Z.

It’s not an equal relationship, but it is one based in mutual understanding and care. And God is just as responsible for holding up God’s end of the bargain as the Jews are for their end. So, when God doesn’t live up to God’s promises, Jews are justified in calling God out and into question.

mother seems to be living with a covenant: you create, and I will take care of your home. Him goes back on that by allowing their paradise not only to be overrun by people, but people who ignore her, look down on her, even hate her, despite her chosenness. Even worse, he allows her suffering, asking her to be more understanding and trust that his judgement is for the best.

What really solidified this interpretation for me, however, was the fact that Him is a poet. His “word” becomes really, really important in a way that, for me, doesn’t really jibe with a “Mother Earth” interpretation. The Earth doesn’t need love, nor does the Earth need the Word. People do.

After Him finally impregnates her with the Future (or with a baby, if you wanna get literal), Him is suddenly inspired to write. He writes, and writes, and writes, and finally he shows mother his work, she reads it, and is immediately moved. Not only moved by his beautiful Word, but touched that she’s the first to receive it.

Then, suddenly, it’s everywhere. People come from all over to receive Him’s Word, but then they start changing things, and adapting the Word to their own ends. mother is praised by Him’s publicist (Kristen Wiig in the best cameo ever!) as the first and the original, but mother is quickly shoved aside to make way for larger, stronger groups interpreting the Word however they like.

To me, the section after Him gives mother his masterpiece represents the moment that God gave the Jews the Torah, along with the idea of monotheism, followed by the way the Jews have been consistently persecuted for the ways in which they try to live the Torah, marking them as different from others.

mother is shuffled from room to room as violence erupts around her, much the same way that Jews have been conquered and displaced throughout their history. 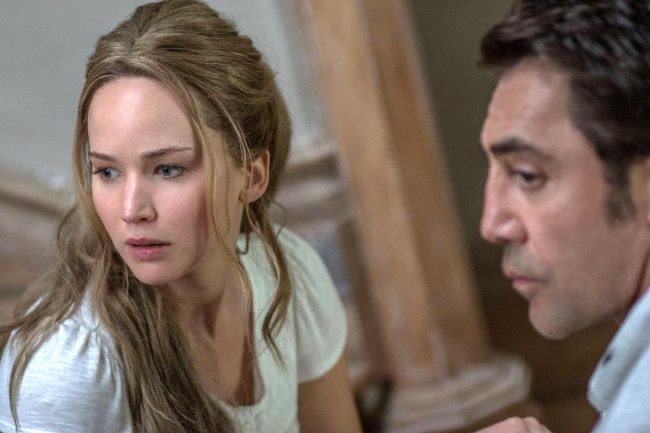 And then, there’s the baby thing. And this is something else that doesn’t make sense to me if this is a strictly “Mother Earth” allegory. Because the Earth wouldn’t care about one child any more or less than it cares about all people. However, a Jewish People who believe in a Messiah are very invested in the idea of a special birth that will lead to their salvation.

To me, mother giving birth, and her days-long stand-off with Him about not letting him hold the baby captures two things. One, it captures the Jewish propensity to wrestle with God. After all, the word Israel (or Yisra’el) means “Triumphant with God,” or “who prevails with God,” and comes from the story of Jacob wrestling with God in Genesis, and being given the name Yisra’el, which eventually becomes the name of the Jewish homeland. In other words, standing up to God is something Jews do.

Two, it captures the idea of a Messiah. So, mother has this baby, then Him takes this baby to other people—other people who then take the baby for themselves, celebrate it, kill it, and eat its body. To me, this read like Christianity coming along, taking the idea of the Messiah away from the Jews, and ascribing it to something it wasn’t meant to be ascribed to.

And mother is furious. So furious, in fact, that for the first time in the film, she actively fights back by stabbing someone. This recalls the Jewish-Roman wars, three distinct times after the death of Jesus that the Jews rose up against the Romans to fight for a Jewish state. And what happens to her? Everyone in the house brutally pummels her.

Basically, this is antisemitism turned up to a fever pitch. Hello, everything leading up to the Holocaust?

And then the Apocalypse happens. Or, rather, both the house (the world) and mother (the Jews) are so hobbled that mother sets the entire thing on fire. This, to me, recalls two possible moments: the Warsaw Ghetto Uprising, during which the Polish Jews stood up against the Nazi transport of Jews to Treblinka, or the Samson Option, the name given to “Israel’s deterrence strategy of massive retaliation with nuclear weapons as a “last resort” against a country whose military has destroyed much of Israel.”

In either instance, we see Jews defending their right to exist, or their right to a home, even if it means bringing everything down on top of themselves. And so, mother sets herself and the whole house on fire, one last assertion of her agency. 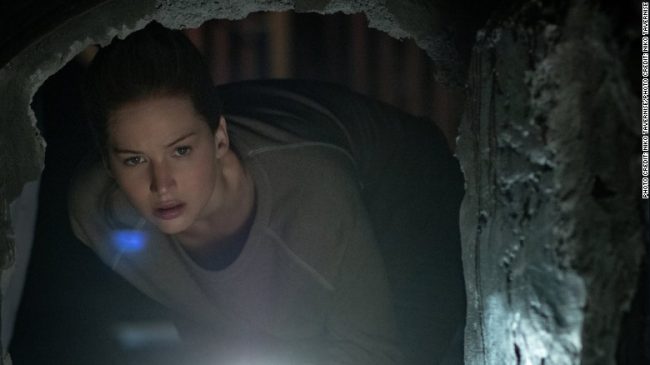 And then, there is nothing except Him (who later calls himself “I Am”) and the charred remains of mother. mother wants to be let go, but Him wants to start the world again, which is kind of a selfish, dick move. Then again, this is the same God who told Abraham to sacrifice his son Isaac only to be like “psyche! never mind! I was just kidding!”

Jewish God can be a jerk. And yet.

And so, the cycle starts all over again. Him takes mother’s heart, and from it comes the world anew, and as the movie ends with a new woman rising from the ashes calling out “Baby,” it spoke to me of the resilience of the Jews and how, no matter what crap they’ve been put through, no matter how constant or brutal the anti-semitism they’ve experienced, they have never been destroyed. They’ve been conquered and brutalized and nearly killed off, but they’re still here. Rising, as mother does, from the ashes.

And the fact that “Baby” is both the first and the last word spoken in the film signal to me the way that Jews continue to wait for the arrival of the Messiah.

Obviously we have to take into account that Aronofsky has specifically said that this film is about the environment. However, Aronofsky is also Jewish, and as we’ve seen in previous films, he tends to explore a contentious relationship with God in a very Jewish way. Perhaps this lens is something that he thought about, but isn’t really talking about much. Or, perhaps the fact that this signaled to me so hard is the product of his subconscious.

What’s interesting is that, in many reviews that have addressed the film’s Biblical references, they tend to approach those references through a Christian lens. Whereas I think that approaching the film through a Jewish lens would give anyone some really interesting layers to explore, while they are also doing what they can to fight for the environment.