In the opening of Greta Gerwig’s Lady Bird, Saoirse Ronan’s teenage character, Christine, and her careworn mother. Marion, listen tearfully to a radio play in the car. For that moment, they’re more open with each other than they are with anyone else, owning a casual intimacy that can only arrive through a lifetime of love and close proximity.

The play finishes and Christine (or “Lady Bird”) instantly reaches for a different channel, while Laurie Metcalf’s Marion suggests—well, states—that silence would be better. In just seconds, they’re verbally sparring with a practised ferociousness that is similarly unique to that lifetime of closeness. It’s a brutal, witty portrayal of that most volatile of familial bonds: the link between mothers and daughters.

Nobody tells young girls that for many, understanding their mother will be a journey. Nobody tells mothers the reverse, either. Part of that isn’t helped by our cultural exposure to their stories, with realistic dynamics of mothers and daughters remaining a rarity on screen. Their lack of representation is a problem to be rectified.

There are so many elements to the relationships between women and their daughters, each unique to the two involved, and few have been translated to television and film successfully. For example, sometimes there’s rivalry, illustrated beautifully in the adaptation of Carrie Fisher’s semi-memoir Postcards From the Edge, or role reversal, as shown by Dayanara Diaz and her mother, Aleida, in Orange is the New Black. One of the most prominent elements that crop up in that relationship dynamic, however, is misunderstanding, most frequently seen in coming-of-age dramas.

The 1990 film Mermaids is a good example of this, where Winona Ryder’s teen character, Charlotte, is trying desperately to be the opposite of her mother. While Cher’s character, Rachel, is flirtatious, self-possessed and rebellious, Charlotte flips the dynamic by desperately trying to be pious, quietly complaining that “sometimes I feel like you’re the child and I’m the grownup.” 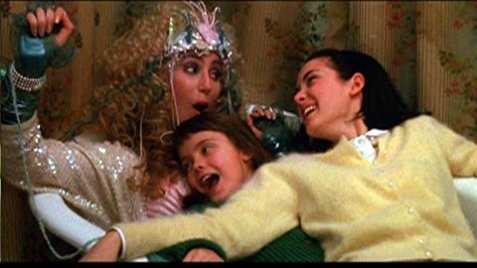 At the same time, Charlotte and Rachel are ridiculously alike in a way that neither seem to realise. Both are impulsive, just as Christine and Marion are, and share a streak of empathy. Part of the reason that both pairs clash so much is due to their similarities—a common sticking point for many mothers and daughters. As Christine’s father tells her, “You both have such strong personalities. She doesn’t know how to help you, and it frustrates her.” In both films, the directors are keenly aware of the silent observations being made, even when the characters involved refuse to see them, too.

As in other portrayals of this kind of relationship, the arguments in both films are brutal, as the women arrive armed with years of knowledge of each other’s weak spots. However, when they need to hit hardest, it’s silence that is the strongest weapon. After years of being candid—of sharing thoughts, worries and feelings—the biggest punishment that Rachel can inflict on her daughter in Mermaids is refusing to talk to her.

We see it in Lady Bird, too. Their big argument before Christine leaves for college is devastating in that it isn’t even really an argument. Christine shouts desperately at her mother, sure that after years of quarrels, they’ll be able to talk it out. Yet in this final agony, there’s no back-and-forth, as Marion won’t engage at all. The foundation of their relationship is talking and sharing. To take that away is to stop everything in its tracks.

Despite how difficult it gets, in the case of these characters, there is a chance at a peaceful coexistence. After all, mothers can also be too critical, feeling like they should, and do, know everything about the young woman that they’re raising. Daughters can react to this microscopic understanding with a reactionary rebellion, pushing their mothers from confidant to worried onlooker. To fix this takes some understanding and the epiphany that many teenage daughters require: that their mothers are fallible, just like them.

Christine understands this when she receives the crumpled up letters that her mother wrote and threw away, while Charlotte sees it when Rachel shares her memories of heartbreak. This concept was also epitomized recently in Big Little Lies, where Reese Witherspoon’s Madeline reaches the end of her tether with her rebellious teen daughter, Abigail. Abigail accuses her of being perfect, to which Madeline breaks down, saying, “I’m not fucking perfect. You think you know me so well, I fuck up too. […] I make mistakes bigger than this.”

In that moment, Abigail gets a glimpse into a different side of someone who had always guided her and who, in reality, is struggling just as she is. It’s a masterclass of a scene, depicting that transition of the two women into something almost approaching equals.

This misunderstanding and reconciliation extends to films perceived as lighter entertainment, too. The Mamma Mia franchise has now been a hit in cinemas with two films, and despite its romantic pairings, the central relationship has always been between Meryl Streep’s Donna and her daughter, Sophie. In the first film, the discovery of three potential fathers is a betrayal for Sophie, who not only has to understand why her mother hid their existence but reconcile herself with her own judgement of her mother’s youthful decisions. Their bond is a huge emotional hook for a film that has garnered plenty of deserved affection.

That said, just as some women have unhealthy relationships with their own mother, when it gets bad, it’s really bad. Toxic relationships across all familial bonds have made it to the big and small screens, and we’ve seen it in films like I, Tonya, Precious, and the caricature of Mommie Dearest. Television has its share, too, with season two of Jessica Jones and, more recently, HBO’s Sharp Objects.

What’s notable about all these is that this intimate knowledge between two people manifests itself not in a clash of misunderstanding, but in an abuse of power. The idea of an unbreakable bond by blood is used to manipulate and guilt daughters to stay connected despite being poorly treated. Just look at Jessica Jones and her repeated attempts to reconcile herself with a mother who continually shows herself to be dangerous, or at her friend Trish’s continued relationship with a mother who belittles her at every turn. It’s another look at the mother/daughter dynamic, but in the darkest way possible.

But in mining these few examples from the vast world of TV and film, it becomes quickly apparent that the options for viewing portrayals of this kind of relationship are limited, despite the infinite complexities that we would all benefit from seeing up on the screen. Sure, there are mothers and daughters in plenty of shows and films, but very rarely do their interactions become the central focus. It’s not like there’s no female audience for this—women make up around half of the moviegoing population in the U.K.

Unfortunately, this scant representation is just another symptom of the lack of gender diversity both behind and in front of the camera. Not only that, but it extends to the lack of racial diversity; most of the examples I’ve found in this specific niche have primarily featured white actors and characters. As is constantly being documented, progress in equality in entertainment is painfully, pathetically slow.

There was one glimmer of hope when Lady Bird got a Best Picture nomination at the Academy Awards last year. In nominations that are never free from well-deserved criticism, it’s still a significant form of industry endorsement and “legitimacy” for a story that was so specifically female. These are steps, albeit tiny ones; the reality is that there’s got to be more stories about mothers and daughters as film improves its representation. Women deserve to see more their stories and experiences onscreen, whether the relationships themselves prove themselves to be idyllic, toxic, or simply transformative.

Jen Scouler is a digital content specialist, film critic and Lord of the Rings obsessive. She’s written for film sites such as Empire and The Fan Carpet, and runs a blog about historical film called Lost In Drama.