UPDATED: Will Man Of Steel’s Wonder Woman Be De-powered, Get New Origin? 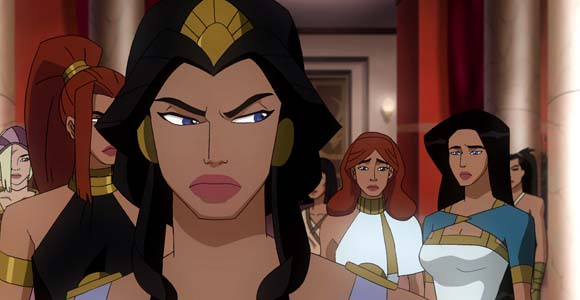 Some new information has surfaced as it pertains to Wonder Woman’s role in the Man of Steel sequel. While it’s a clear cut rumor, if true, I imagine a few fans might not be too happy about it.

Everything we’ve heard about Zack Snyder’s Man of Steel 2 has been developing at an unusual pace, including the addition of Gal Gadot as Wonder Woman. However, we’ve yet to learn what her place in the film will actually be. There doesn’t seem to be a whole lot of room considering the main story is meant to feature Superman and Batman, and according to a new report, that may mean little screen time for Wonder Woman.

Jett, from Batman on Film, answered a few “mailbag” questions on the site the other day about the sequel. It should be noted, while Batman on Film is normally pretty good with their information, this is still completely unsourced. Jett makes sure to note, “Responses to reader’s questions are based on inside information, industry scuttlebutt, and my opinion. Nothing should be taken as confirmed news unless explicitly stated as such.”

That being said, as to how Wonder Woman will feature he wrote, “Personally, I’d say it’ll be about on par with Scarlett Johansson’s first appearance as Black Widow in IRON MAN 2. I believe that it’s a cameo-plus type of role that will (hopefully) serve as a springboard to a solo Wonder Woman movie.” Though Gadot has hinted at significant training for the role, so we’re hopeful if it’s only a “cameo-plus” it will be one where she sees some action. However, he went on to give other details:

With all that said, I’d bet a year’s pay – in MONOPOLY money, of course – that the “Amazons” of this cinematic DCU will be descendants of those “ancient Kryptonians” who attempted to set up Kryptonian outposts throughout spacedom thousands and thousands of years ago. Furthermore, I say that Wonder Woman will be powered-down, if you will, relative to Superman because these Amazons have evolved and adapted to living on Earth for hundreds of centuries. And since Kryptonians are produced without any “He’n and She’n” – Jor El and Lara excluded – couldn’t this original Kryptonian on Earth have used this reproductive science to create an all-female race? I say yes!

While this scenario could make sense within Man of Steel’s universe, I find it a poor way to introduce Wonder Woman to theater goers. God forbid she have her own origin and source of power. Let’s have her entire story dependent on the alien race Superman hails from instead. This is not to say the mythological aspect of Wonder Woman would be removed, but I’m still not a fan of this particular alteration. Are we just going to pass off all the Justice League as descendants of Krypton instead of allowing the audience to accept the individual backstories of the DC Comics characters? Anyway, really hoping this one turns out to be false.

OK, it’s not funny any longer. In the recent mailbag I did with you all, I speculated on how Goyer/Snyder *might* account for the origins of the Amazons: Decedents of ancient Kryptonian astronauts who were able to create an all-female race due to Kryptonians artificially creating their offspring. It was nothing but a guess — pure speculation and my opinion — and nothing more. Now, many outlets have picked up the “story” and have run it as either me claiming it to be fact or me claiming it’s “inside info/rumor.”

So, it seems this one was entirely a blind theory on how to account for Wonder Woman rather than a theory based on things they’d heard along the way, as we previously assumed. Thank Hera.

(via Batman on Film, image from 2009’s animated Wonder Woman)