Mother wants us to live as sisters I’ve been holding a grudge against Mortal Kombat for a couple of years now. That’s not to say I’ve stopped playing the games, I’ve just been … miffed at them since they killed my good sis, Mileena, back in Mortal Kombat X. Despite the grotesque kiss of death she received from D’Vorah, I’d hoped that she’d come back somehow—after all, plenty of characters don’t stay dead in this franchise. Well, do we have some news for you.

But first, before we get to the new Mortal Kombat 11 Ultimate: Official Mileena Gameplay Trailer (!!!) that was released today, some history:

Mortal Kombat 11 came and went with no sign of my cannibalistic queen, which is a real shame since there were some stellar redesigns and fantastic female-driven moments in the story (Kitana Khan? Yes please!). I wondered what a Mortal Kombat 11 Mileena would look like, where her alliances would lie, and how much flesh she’d devour before striking a bloodily seductive pose.

Listen, I have a type ok?

I never got around to playing the Mortal Kombat 11 Aftermath DLC, but I imagine with Shang Tseng involved that there’d be all sorts of betrayal. More characters were added, some part of the series, some … RoboCop … and then friendships were announced.

And then a trailer for the Aftermath DLC was shown.

And then Mileena was running out to play patty-cake with her sister.

LOL no, she’s not. Except, well, actually, she is! Back in October a trailer was released, revealing three new characters in a second Kombat pack, helpfully called Kombat Pack 2. And yes, before you @ me, Rain is slick (get it, cuz he uses water?) and Rambo is an amusing addition to the ongoing trend of NetherRealm Studios constantly creating fanfic AU of their own series.

I’ve been a fan of her since her inception. Something about her ferocity and the way she oozes sex appeal while completely embracing her Tarkatan features made her an instant fave. Maybe because, back in the day, I expected everyone else BUT Mileena to be the “sex symbol” of the series. I expected her whole arc to be some sort of “I hate who I am, I wish to look normal like my sister” narrative, but nope, she unapologetically loves herself. She’s the kind of woman who takes a nude photo of herself and displays it in the entryway of her high rise New York City apartment.

To celebrate the return of this absolute legend, nerd girl extraordinaire Megan Thee Stallion shared a video on her Instagram and look, loooook, imma need NetherRealm to make a Megan cosplaying Mileena skin.

I just wanted to stop by real quick and let y’all know that thee bitch is BACK 🔥🔥🔥 HotGirl Mileena is back in the game 😛😛😛 Gameplay bout to drop real soon. #MKUltimate #ad @mortalkombat

Imma also need this DLC today. Can we fast forward to November 17th? Here’s a look at the newly-released gameplay trailer today:

From the looks of the new trailer, Mileena did get a revamp, and oof, her fighting style is as vicious as ever. As always, she’s not for the squeamish. You could say that for pretty much everybody on the roster, but Mileena offers a special kind of discomfort. The repetitive, speedy sai stabs are one thing, but the large chunks of flesh she rips out of her opponents with her teeth? Daaaaamn! How the hell does anyone survive her X-ray attack? And that fatality? Someone’s been practicing their best Sonic the Hedgehog maneuvers. Fastest thing alive indeed.

Here’s the official word on her story, via Warner Bros. Games and NetherRealm Studios:

The product of Shang Tsung’s diabolical cloning experiments, Mileena is a fusion of Tarkatan blood and Edenian physiology, making her the perfect blend of Baraka’s ferocity and Kitana’s athletic grace. The evil hybrid benefits from the strengths of both bloodlines in battle, utilizing extraordinary speed, nimble acrobatic prowess and terrifyingly raw savagery, along with her trademark sai, sharpened claws and new twists on her classic special moves.

Brought forward in the timeline by Kronika, Mileena has learned of her tragic future – her brief reign as Outworld’s Empress and her death at the hands of D’Vorah and Kotal Kahn. Determined to regain her throne, Mileena has begun Outworld’s civil war anew and will destroy any Kombatants that stand in her way. Mileena joins the roster as a new playable fighter on Nov. 17 as part of Mortal Kombat 11 Ultimate and Kombat Pack 2. 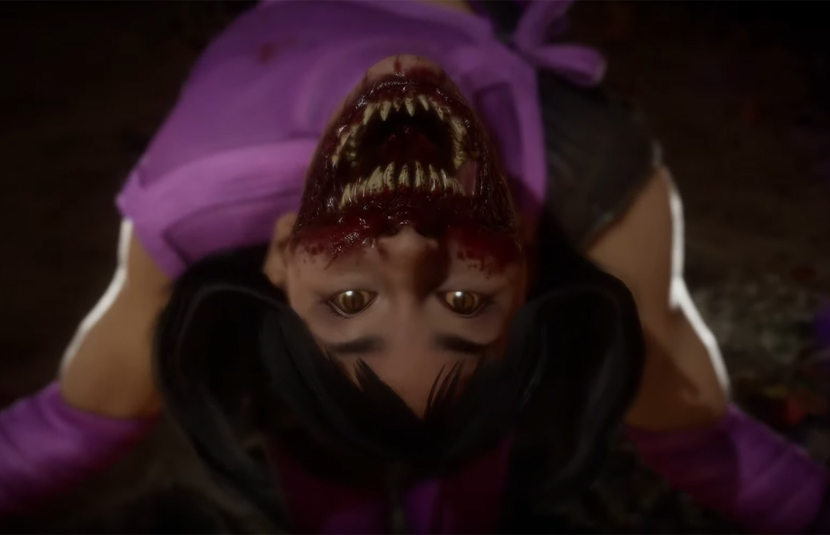