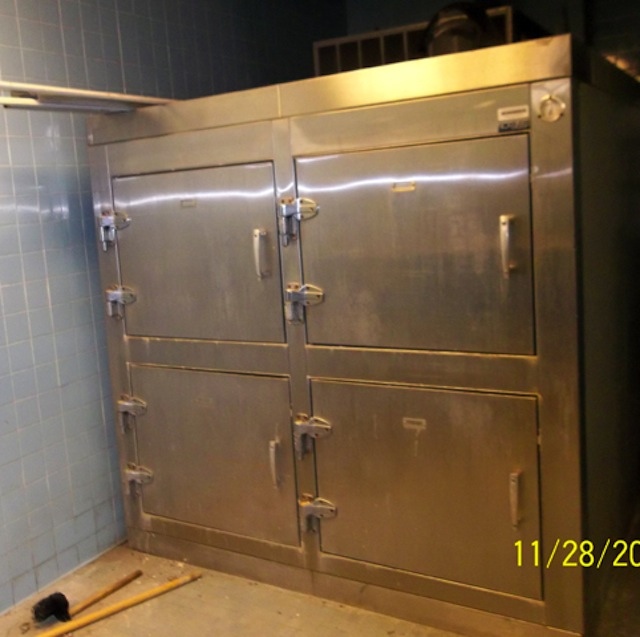 Looking for a way to keep things nice and frosty this summer? Whether it’s beer or bodies you’re trying to keep cool, the city of New York may be able to help you out. Just visit eBay to place your bid on a morgue refrigerator put up for sale by the city’s Office of General Services. According to the listing, this steel refrigerator, hailing from the Manhattan Psychiatric Center, is used, but in good condition (which we assume means no longer full of dead bodies) and has space to hold up to four cadavers or an as yet determined quantity of cold cuts and six packs.

Clearly, if you’re a mad scientist working on a project that spits in the face of God by reanimating dead tissue, this four-refrigerator could prove invaluable. Don’t think of it as just a simple refrigeration unit, though. Mechanics and tinkerers could easily convert the unit into the world’s biggest, most unnerving toolbox. A more entrepreneurially minded owner could convert the fridge into the world’s goth-est bed and breakfast. Heck, I’m proposing that the Geekosystem staff chip in and buy this as a place to escape from the sweltering New York summer and catch a cool mid-day nap. The sky is the dang limit here, folks!

Buyers should be aware, though, that whoever wins the auction will be responsible for removing the morgue fridge and sending it off to its new home. Potential bidders should also be aware that this thing is almost certainly Polstergeist-level haunted. Because seriously, folks, they don’t sell off the non-haunted morgue refrigerators.