Scientists Suggest Earth May Have Once Had Two Moons 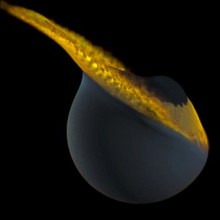 At one time, Earth may have had two moons, the smaller of the two crashing into the larger to create one moon. This theory, suggested by scientists from the University of California, Santa Cruz, may explain why the far side of the moon has many mountains while the side nearest to Earth does not.

So far, the theory, which was published in the journal Nature, hasn’t been substantiated by any actual research. However, the scientists hope that data from two NASA lunar missions will be able to either prove or disprove their ideas.

It has been a mystery why the far side of the moon is covered in craters and large mountain ranges, some higher than 3,000 meters, while the other side of the moon is flat with smaller craters. According to the scientists, this can be explained if a small lunar body formed between the gravitational fields of the Earth and the Moon. After millions of years being tugged between the Earth and the Moon, this smaller object would have slowly crashed into the larger moon at a velocity of less than three kilometres per second.

The scientists believe that the impact of a small moon into the larger moon would have caused a build-up of material on the lunar crust and would also have redistributed magma beneath the surface to the near side of the moon. This idea is backed up by observations from Nasa’s Lunar Prospector spacecraft. However, this just demonstrates the plausibility of the idea, it is not proof that the theory is correct.

One of the scientists promoting this theory, Martin Jutzi, says that data obtained by NASA’s Lunar Reconnaissance Orbiter may be useful for proving the theory. The scientists also plan on studying high resolution gravity maps that will be generated next year by NASA’s Gravity Recovery and Interior Laboratory (GRAIL) mission. Although, Jutzi says the scientists would like to obtain samples from the far side of the Moon to prove their theory based on the formation of the rocks. Until then, the two moon collision is just an idea, although a promising one.