Smile and say, "The Moon is made of cheese!" 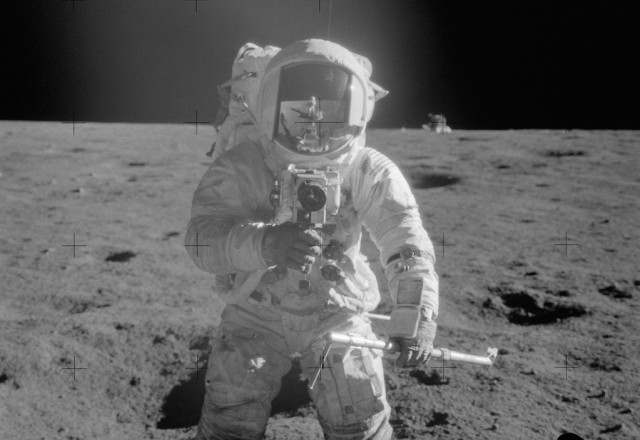 Over the weekend, a Hasselblad Electronic Data Camera that went to the surface of the Moon during the Apollo 15 mission was auctioned off and sold for almost $1 million. The only problem is that the camera may not have actually been on the Moon, or near it, or even to space.

According to auction organizers at the Westlicht Gallery where the sale was held, the camera was used by astronaut James Irwin during his Apollo 15 Moon landing. Gallery owner Peter Coeln has even asserted, “It has Moon dust on it.”

The website collectSPACE, where we found this story, has what we’d call some pretty damning evidence against the authenticity of the camera. To be clear, though, they do not make the claim that the camera is a fake. They simply point out “inconsistencies.” The most suspicious to us is the Reseau plate, which superimposes crosshairs and a unique number on all images taken with the camera. You can see an example of the crosshairs in the image above, although it is actually from a camera on Apollo 12.

The Reseau plate from Irwin’s Apollo 15 camera superimposed the number 38 on all the images. Comparing photos from the Apollo 15 mission to a photo of the plate in the camera that sold at auction shows that the crosshairs don’t line up, and the “38” appears to be different.

It’s absolutely possible that the plate was damaged at some point and replaced, but that’s not the only suspicious thing about the sale. The body camera sold at the Westlicht auction was previously sold at an auction in New Hampshire. The auction house in New Hampshire made no claim that the camera ever landed on the Moon. It did include a letter from a NASA photographer that said it flew in the Apollo mission, but that only claimed it had been in the command module.

There’s also the whole question of how exactly the camera got to auction in the first place, as it’s illegal for astronauts to sell their souvenirs or “moonrebelia.”

The evidence isn’t exactly definitive on either side of the argument, but if we paid $1 million for a Moon camera, we’d want to be pretty damn sure it had actually been on the Moon.

(via collectSPACE, image via NASA Goddard)