The Most Valuable Properties in Monopoly | The Mary Sue

The Most Valuable Properties in Monopoly 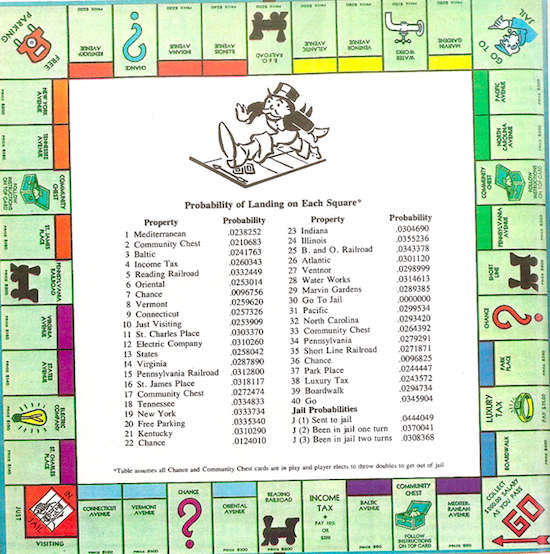 Engineering student and Deadspin reader Matt recently wrote a fascinating piece on the strategy behind beloved board game Monopoly as enlightened by Markov chains, and prepared the table above listing the probabilities of landing on each square. He has lots of interesting stuff to say — for instance, it’s no surprise that landing on the “Go to Jail” square is bad news, but it’s less intuitive that a free player just visiting the “In Jail” square has especially good prospects.

But what does all of this mean for a player trying to win at Monopoly? Matt breaks it down in layman’s terms:

If you take into account the money you put in, the money you get, and the probability of landing on that square, you can determine the Expected Return of that monopoly. The Orange monopolies still do very well in Expected Return and a player can expect to break even in the shortest amount of turns with these properties, so Orange is a very safe and good strategy. However, the Green properties actually yield the greatest Expected Return, but this is a much riskier move as the game must go on for a long time in order to see those investments pay off. So the choice is yours. Try to end the game quickly using the Orange monopolies, or humiliate your opponents by having them mortgage their kids to pay off rent at Green. And no, women are not impressed/amused/interested when I tell them this.

To summarize: Whereas the orange and red properties all have probabilities of greater than three percent that players will land on them (this adds up if you buy multiple properties, of course), only two non-utility properties — Saint Charles Place and Atlantic Avenue — do. However, factoring in the higher rents on slightly lower-probability green properties, these actually have a higher expected value, though it takes time.