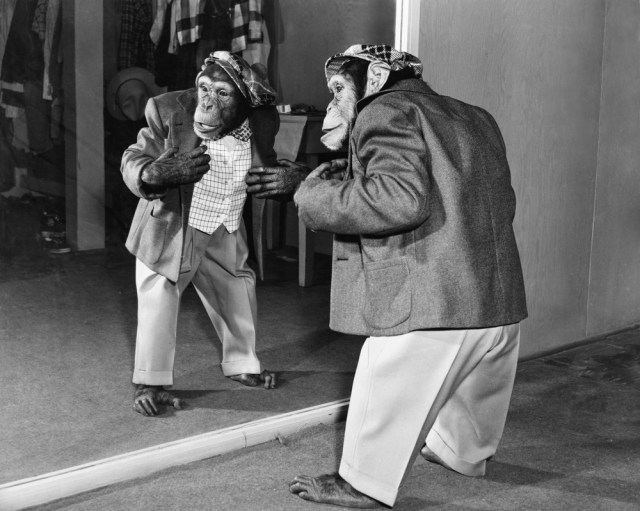 Yes, I know that’s a chimpanzee, we have more important things to discuss. Monkeys’ love of their own butts.

So… I don’t remember the first time I saw myself in a mirror, do you? For most of us I’d assume it happened when we were toddlers and we probably couldn’t even stand up to look at our butt if we tried.

Humans can recognize their own reflections (because seeing and understanding what you’re looking at are two different things) as young as two, but not every creature in the animal kingdom has that ability. It was previously thought rhesus monkeys could not recognize their own reflection, but new research proves that with a little training they’re perfectly capable of finding themselves super hot.

They sat each monkey in a secure chair facing a mirror. Then they shined a red laser dot that caused mild skin irritation somewhere on each monkey’s face. Every time monkeys pawed at the dot they received a treat. As their training progressed, monkeys pawed at a non-irritating laser dot, and eventually touched an odorless red dye mark on their faces when looking in the mirror.

After receiving their training, the monkeys were ready for their final test: the standard mark test. Researchers shined a laser pointer at different parts of the monkeys’ bodies while they were in their home cages, which were decked out with floor-to-ceiling mirrors. When the trained monkeys looked in the mirror, they rubbed and picked at the marking — passing the test for the first time. Untrained monkeys, on the other hand, didn’t acknowledge the laser dot when they looked in the mirror.

Yadda, yadda, yadda, theory confirmed with a bonus of finding out the monkeys would use their newfound knowledge to look at their butts and junk. We live in a wonderful world.

But in case you were wondering the reasoning behind this study, “the way monkeys’ brains change during their mirror training could guide researchers toward the neural origins of self-recognition,” writes Discover. “Although humans can do this automatically, this skill is impaired in people with mental disabilities, autism or Alzheimer’s. Knowing how monkeys acquire this skill could, perhaps, help people with these conditions learn it as well.” The researchers published their work in Current Biology this week.