Get the perfect picture of yourbelf. 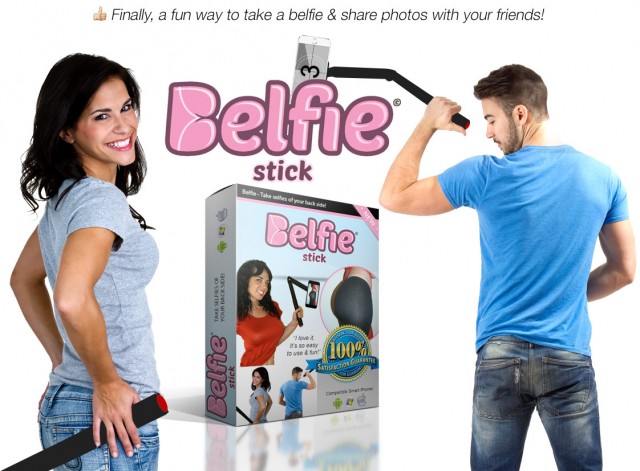 Always make sure you get your  backside.

The Belfie Stick is ostensibly a real product—despite being curiously out of stock at the moment—that will allow you to take pictures of your butt without having to find another human being willing to aim and hit the shutter while you contort into your own ridiculous butt pose. I bet you’re rethinking that eye roll at the giant, ten-person table taking up all the room next to you in the Shake Shack as they use a selfie stick to document their hilarious antics now, aren’t you?

At least I understand the selfie stick. Who wants to hand their phone to a stranger to take a picture anyway? It’s not 1940; we have the technology to take pictures of ourselves without the camera being absurdly close to our faces. If you’ve got the self confidence to rock a selfie stick, have at it. The Belfie Stick just made you look way less odd in comparison anyway.

I mean, aside from the fact that you could probably do just fine taking butt pics with a regular selfie stick, why “Belfie”? Is a “belf” an elusive, half-elf half-butt hybrid creature you’re trying to capture on film as evidence of its existence? Because that’s sure what it sounds like.

A selfie is taking a picture of yourself, so taking a picture of your butt should be a buttie. And don’t tell me that sounds too close to “buddy.” English is full of confusing words that sound alike but mean vastly different things, and I very much doubt anyone who would use the word Belfie in seriousness has any friends left to necessitate use of the word buddy anyway. Buttie and buddy would likely have mutually exclusive demographics.

But enough old man get-off-my-lawnery. I don’t mean to sound like I’ve got a (belfie) stick up my butt about it. Etymological concerns be damned, you can pre-order your very own Belfie Stick for $79.99, because this is the Internet, where ridiculous technology to help us post posterior pics is probably not even close to the weirdest thing we’ll see today.