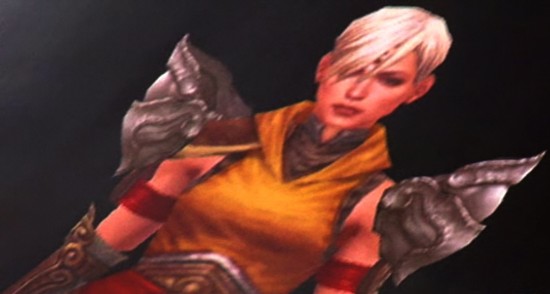 Two days ago, the Jace Hall Show revealed an exclusive chat with Blizzard developers, where they were shown the character designs for the female representation of the monk class for Diablo III.  Now, if you’re a Diablo fan, and salivating over every tiny screen grab and gameplay trailer, you’re probably already aware.

However, if you are not, and are simply generally interested in Diablo III, because, say, just as a hypothetical example, all your friends are really excited about it and you haven’t played Diablo so you’ll just take their word for it that you should be…

Then we’ll try to give you the quick story, show you some screen grabs, links, and keep you informed on bad ass lady monks as efficiently as possible.

Plenty of high rez (1920×1200) screen shots of the Jace Hall Show can be found here, at the fansite BlizzPlanet.com.

If you have no idea what we’re talking about, take a look at the monk class trailer, found here, at the official Diablo III website.

And finally, for those interested in the whole thing, we embed the Jace Hall Show episode below.  The segment pertinent to this post begins at 6:44, lasting only until 8:00.  A ripe core, surrounded by husk.  Wait.  Is that Stan Lee?  Pretending to be a really hilarious jerk?  Touché, Jace Hall Show.  Touché.