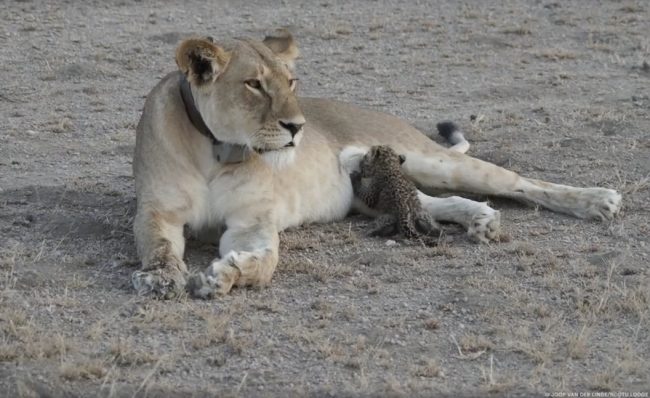 One photographer managed to capture an incredible sight: a lioness nursing a leopard cub out in the wild. A guest staying with Kope Lion, an organization that “strives to foster human-lion coexistence” sent a photo of a tiny leopard cub suckling at a lioness’ teat. While this happens fairly regularly in animals bred in captivity, this photo is actually the very first documented case of such an occurrence happening out in the wild. The result is both historic and wildly cute.

In a first, a wild lioness is photographed nursing a baby leopard https://t.co/1w5W9LyCTE

Because I know someone is going to say it: yes, she’s still a wild lioness even though she has a collar on. The collar (placed by Kope Lion) is mostly just to track the lioness’ movements.

Normally Nosikitok, the lioness, may not have taken in the extra cub, but because she had given birth to four lion cubs earlier that week, she had milk to spare and was more likely to take on an extra one, even if it’s spotted. Luke Hunter, president and chief conservation officer at Panthera, said that under any other conditions, she would have probably killed the cub herself, as it may represent competition for her own babies later. He also said, “It’s unprecedented. It’s a once-in-a-lifetime event.”