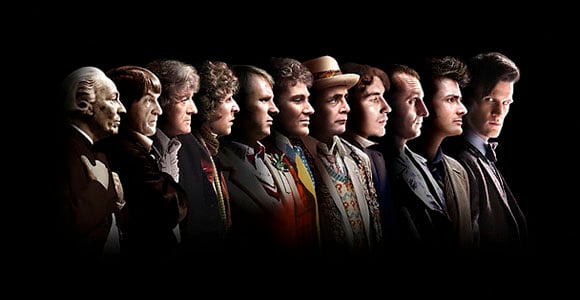 We had a few big surprises during the Doctor Who 50th anniversary celebrations. Surprises which got Whovians very excited. Considering the buzz, fans thought they might be able to get some more of that thing they liked so much by starting a petition. However, it doesn’t look like showrunner Steven Moffat plans on acquiescing anytime soon. Find out more after the jump including which classic Doctor is still a bit miffed about having been left out of the main event.

The petition to get Paul McGann, previously only the Doctor in a 1996 movie and audio plays, his own live-action series currently has close to 17,000 signatures. Matthew Jacobs was the writer of that TV movie and couldn’t have been happier about McGann getting utilized the way he did. He spoke with Stand By For Mind Control:

Actually [it’s] quite moving. The die-hard fans have always loved Paul’s incarnation, but the majority of the now massive worldwide audience that follows the show doesn’t really know him. So Moffat using Paul McGann to set up the 50th has taken McGann’s Doctor right into the spotlight again…Today, a massive group petitioning for the eighth Doctor to have his own series has approached me. But then that’s what the show is about… resurrection! Except it’s not just the second coming or a third. I guess as long as the ratings stay high this sci-fi messiah is on a loop… Does that sound really cheap? Who cares; I like it!

But it seems not everyone is keen to continue down memory lane, as it were. Digital Spy reported on Moffat being asked about multiple Doctors at the official Doctor Who Celebration at London’s ExCel.

“One Doctor at a time is the real rule – ‘Who would be on the lunchbox?’ is always my question when we talk about having more than one Doctor.”

Moffat added that Doctor Who will now return “militantly” to the idea of featuring just one Doctor at a time.

“I have a slight paranoia that at the moment it seems like every bugger’s playing the Doctor – more or less all of Equity!” he joked. “Quite soon, it’s going to go back to… ‘There is one Doctor and that’s who he is’ – he’s one man with many faces, he’s not a committee of people with unusual hair.”

But if it’s unclear whether or not Moffat was specifically speaking about McGann and not just the three Doctors in “The Day of the Doctor,” here’s some possible clarification thanks to an interview with Flicks and the City:

You know what’s really important with The Night of the Doctor? It’s not that it was Paul McGann – brilliant as he was – it’s that you had a bloody surprise! You know back in the day we used to do those! …And I’d like to do that again…I think this will usher in not so much a Paul McGann mini-series but usher in more minisodes, and I think we should take them more seriously than we used to. Night was the first one we’ve actually said, ‘Let’s make a high production value belter and let’s give them a surprise!…You can count on us doing something like that again, but we won’t tell you when! I’ve actually told the BBC, ‘if we do it again we’re doing it in Cardiff and we’re not even telling you what we’re doing and we’ll give you it on the day’…

Firstly, I just have to say – YES IT WAS THAT IT WAS PAUL MCGANN. Ahem. But seriously, while the surprise played a huge part in it, the fact that they decided to use the 8th Doctor was a huge freaking deal. But I agree with Moffat, more minisodes! While I would prefer for McGann to get a whole series of them, minisodes are a great place to give fan favorites some air time (*cough*Madame Vastra*cough*).

Unfortunately, not everyone is pleased with how the Doctor Who anniversary celebrations shook out. While 6th Doctor Colin Baker took part in “The Five(ish) Doctors” special, he really would have loved to be a part of “The Day of the Doctor.” According to a report on The Mirror, Baker said:

All or none, that’s what I would have thought…I know Tom did it longer than anybody else and he’s the oldest Doctor but by asking him and not us, it makes you feel like a second class citizen…Peter Davison, the fifth Doctor, said way back that they were not going to have us in the special. At the time, we didn’t know that Tom was in it which was slightly irritating…Even though I don’t look the same, none of us look exactly the same, it would have been nice to get a small part in it – to give back to the fans.

As much as Moffat insisted the anniversary wasn’t about looking to the past but to the future, it was about both. “The Day of the Doctor” was filled with references to the show’s past and I agree with Baker, it would have been nice for all of the living Doctors to be included, even if it wasn’t as the Doctor.